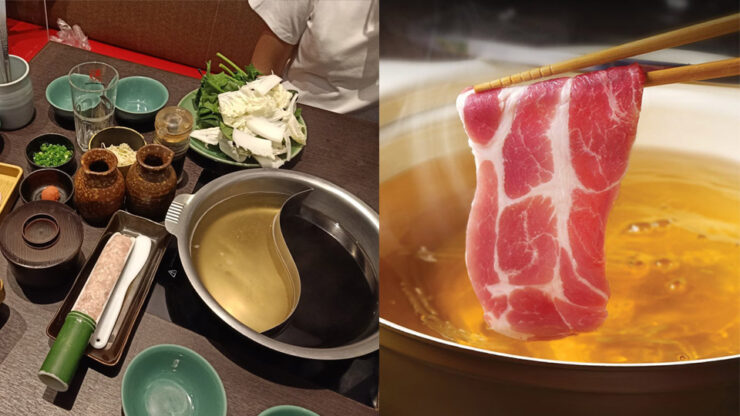 Blogger stirs up controversy with his review of a local foodies’ favourite Shabu-shabu and Sukiyaki establishment, Momo Paradise as the internet rushed in to back up their beloved dipping joint. Thai netizens on multiple platforms have expressed their grave displeasure in large numbers, the blogger’s original Facebook post in Thai received 14,000 shares and 19,000 comments within 2 days, and even the hashtag #SaveMoMoParadise has gone viral on Twitter.

“I’m only going to give this 2/10 score,” said a local blogger about his experience at Momo Paradise. “I’m so disappointed, the dark Sukiyaki soup is so salty I might get kidney disease! I would rather be going to a restaurant next door to my house for ฿199,”

His review quickly received backlash as foodies perceived his review of Momo Paradise as being on an uneducated side; the internet was convinced that the blogger had eaten the meal in a Hot Pot way “I thought my tongue didn’t adjust to the flavour yet, that’s why I kept sipping the soup but after 2-3 cups of soup it is still salty,” said the blogger.

For Hot Pot, diners start with clear and mild soup where they add toppings then enjoy the cooked topping with the soup where they can add in the sauce to their liking. The soup will take on the flavour of whatever has been added into the pot and diners can sip the soup. Sukiyaki on the other hand, comes with a sauce based soup meant for only dipping the meat and not particularly for sipping as it is too salty to begin with.

“Before reviewing anything, maybe you should do some research on the dish and how to eat it correctly first? Momo Paradise has been around for so long and there are already so many reviews about the shops. If you want to be a professional reviewer, you should do more homework otherwise stay in a wannabe zone!” said one foodie commenter. “It’s as if you went to a Sashimi restaurant, and asked the waiter why the fish is not cooked,” another foodie added.

After the backlash, the blogger had came out with a post addressing that he was only being honest and wanted to giveaway discount voucher from Momo Paradise, that the restaurant was giving away to all customers, “Honestly I also tried to have Shabu-shabu the correct way, dipping the meat only in the soup also but it was still too salty,” he moaned “I was just trying to be honest but if people are not happy I’m willing to give out discount vouchers to Momo Paradise for my followers,” The internet didn’t buy in “You’ve given Momo Paradise such a negative review, but after the backlash created an apology post and giving away complimentary voucher from the shop even though you’ve said you’ll never go back again? I think you’re only insulting your followers,” commented fellow local food blogger.

Whatever the ending may be in this sip or dip war, Momo Paradise and fellow Shabu-shabu business sure did gain spotlight in the Bangkok Foodies’ world once again. Have you tried Shabu-shabu or Sukiyaki? Check out the differences between Hot Pot, Shabu-shabu and Sukiyaki here.

Want to get noticed?! Get in touch with the Foodies Marketing Specialist.

Check out what foodies are currently eating: https://www.bangkokfoodies.com/

Promote or Advertise with us: [email protected]