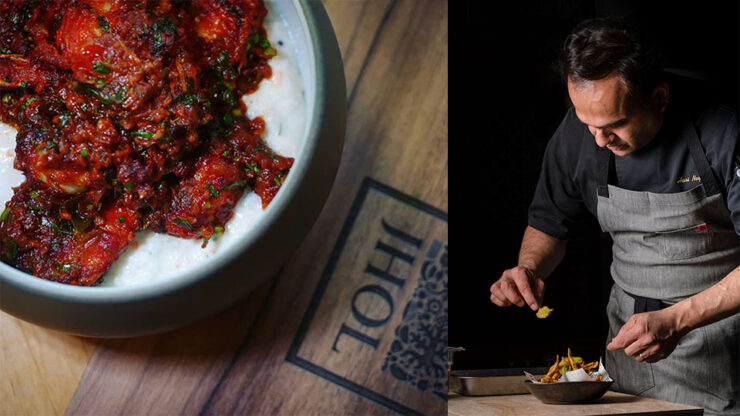 “JHOL. For anyone who is curious about the rest of India or needs proper Indian cuisine flavours outside chicken tikka masala land. No pic of the Mango kulfi as it was devoured in seconds” said Geet Harris, one active member of the popular Bangkok foodies Facebook group. “Great dinner and amazing host. A must-go-to. I have no words to express my experience at this great new place.” boast Bangkok’s Shavinraj Gopinath, aka, “Fairy Godfather” of the Bangkok bar scene and Co-Founder / Bartender of Philtration Bar.

These were just a couple of testimonials from the many devout foodies and industry leaders seen popping up on Facebook feeds of late. JHOL  is a word which continues to appear on the lips and in the ears of discerning Indian cuisine food-lovers in the gastronomy scene.

JHOL Coastal Indian Cuisine and Chef Hari Nayak, owner of JHOL have graced almost every notable food and lifestyle website, in less than a year of operating, and give or take the few months they were closed due to the COVID-19 pandemic. They were also recently featured in a renowned international news and current affairs website article, Channel News Asia’s, “Who are the Indian chefs shaking up Bangkok’s dining scene?”. Chef Hari Nayak was listed among Bangkok’s Indian cuisine culinary ‘giant’s; Chef Deepanker Khosla of Haoma (Elite Magazine Restaurant of the Year 2019) , Garima Arora of Gaa (Michelin*) and of course, Gaggan Anand of Gaggan Anand (Michelin**).

Which certainly makes one wonder, what’s so special about this place?! Channel News Asia declares, “The truth is JHOL has found a niche that has never been explored in Thailand as yet. “…the Thai capital covers an array of familiar bases. Nevertheless, glaring omissions in the city’s Indian culinary arsenal remain. And it was one of these gaps that celebrated chef Hari Nayak has attempted to fill with Jhol, an ode to India’s glorious coastal cuisine.”

To put it simply, The cuisine at restaurant JHOL does not focus on Bangkok’s mainstream Indian flavours, the ones commonly acknowledged as North Indian or Punjabi. Chef Hari articulates in his own words the concept of JHOL’s cuisine, “The typical perception about Indian cuisine outside of India is that it is greasy, always curry-based and focused on the stereotypical north Indian or Punjabi. There is so much more to Indian food than that. We are showcasing regional Indian food from southern coastal India.” To be more precise, JHOL Coastal Indian Cuisine narrows-in around Konkan and Malabar on the West Coast as well as Chettinad, Pondicherry and Bay of Bengal on the East Coast of India.

Chef Hari himself, heritage is from the coastal part of India. Born in the southwest Indian state of Karnataka, Hari grew up in the city of Udupi, before moving to the bright lights and big city of New York. Chef Hari’s culinary inspiration for JHOL stems from his grandmother’s cooking, combined with his appreciation for Thailand and Thailand’s abundance of fresh and fruitful produce, many of which create flavours similar to that of coastal Indian cuisine.

Chef Hari reiterates, “The produce and ingredients that are available in Thailand are very similar to that of coastal India. I love Bangkok and the amazing restaurant scene it offers. There are a lot of similarities in the local ingredients and flavours with regional coastal cooking from the Indian peninsula and Thai cooking. So, I would say we are lucky to be in Thailand. We can create some amazing Indian dishes using Thai produce.”

Diners may be surprised to find that local Indians are not the majority of diners at JHOL but the local Thais appear to be appreciating such similarities in taste. Many dishes on JHOL’s menu were adapted based on Thailand’s cuisine, one of them being the ‘Bhel Puri’ which Chef Hari describes as “a popular street food from India made with puffed rice, chutneys and fresh veggies whereas JHOL uses Southern Thai, crispy rice salad “Khao Yam”.

Another big hit among the locals is the ‘Malabar River Prawn’, inspired by the grilled Thai river prawn, to create a dish which reflects Malabar Indian flavours. And lastly, pertaining to another famous Indian snack, the “Pani puri”. The ball-like snack is commonly stuffed with spiced potato and chickpea with spiced tamarind water but at JHOL is substituted with a mass of avocado, jicama and spicy Thai passion fruit water.

JHOL Coastal Indian Cuisine challenges what Bangkok locals have long become accustomed to, there is no shortage of Indian restaurants in the city, yet JHOL bravely faces the uncertainty of a market unfamiliar to “Coastal Indian Cuisine”, on top of being a new Indian restaurant which chooses to integrate – both creatively and playfully – local Thai ingredients. The response so far has been one of surprise and success, but like everyone right now, there will be more challenges to face ahead. Although, one can only admire the beauty that JHOL is bringing to Bangkok, and that’s a new diversity with a unification between cultures and taste.

Chef Hari concluded, “Most of our Curries are prepared in a similar way as Thai curries, we make a curry paste or a base and finish with fresh pressed coconut milk. We want them to feel and understand that there is more to Indian cooking than Chicken Tikka Masala, Samosa and Naan.”

Pani puri
The most iconic Indian street snack called different names in different states. West Bengal called phuchka, Delhi all gol gappa, orissa called gup chup and in mumbai called pani puri. The most common stuffing is spiced potato and chickpea with spiced tamarind water. At jhol we stuff it with a mass of avocado, jicama on top and spiced passion fruit water.

Mini appam
Appam is a South Indian pancake dish, made with fermented rice batter and coconut milk, common in the South Indian states of Tamil Nadu and Kerala, as well as the island nation of Sri Lanka. We made a miniature version with spicy young jackfruit, soy bean mince, kaffir lime creme and fried beetroot.

Sol kadi ceviche
Solkadhi is a type of drink, an appetizer originating from the Indian subcontinent, usually eaten with rice or sometimes drunk after or along with the meals. Popular in Goa and Maharashtra’s coastal region, it is made from coconut milk and kokum, also known as Aamsol or Amsul. We serve this as a sauce with raw rolled seabass, crispy fried ginger, onion and chilli.

Prawn koliwada
Koliwada refers to a colony of Kolis (fishermen) in India. Several places named Koliwada are located across the Mumbai city in India. We cook the prawns in this style with a layer of cold curd rice from south of india at the bottom.  ( Curd rice is a south Indian dish made with precooked rice, curd (yogurt) & tempering spices. It is more often eaten by south Indians as a part of a meal. Curd rice also known as thayir saddam & daddojanam makes a great summer food. )

Chili pepper crab
Lump meat of crab used here is served with an egg appam with a sprinkle of curry leaf podi.

Chicken ghee roast is a popular Tuluva Mangalorean Chicken recipe whose origins go back to a town, Kundapur, close to Udupi.[1] Chicken ghee roast has a fiery red, tangy and spicy with a flavor of ghee roasted spices. This chicken ghee roast recipe originated in the kitchen of “Shetty lunch home”, in Kundapura, about 90 kms from Mangalore city. We serve it with a crispy cone dosa.

Mango kulfi
Kulfi or Qulfi is a frozen dairy dessert originating in the Indian subcontinent in the 16th century. It is often described as “traditional Indian ice cream”. We make it with mango and white chocolate, kaffir lime crema, pistachio and choco soil, berry gel.

Coconut kheer
Kheer, Payasa, Payasam or Phirni, is a type of pudding from the Indian subcontinent, made by boiling milk, sugar, and rice, although rice may be substitute with one of the following: bulgar wheat, millet, tapioca, vermicelli, or sweet corn. We make it with rice and coconut with condensed milk ice cream and passion fruit leather.