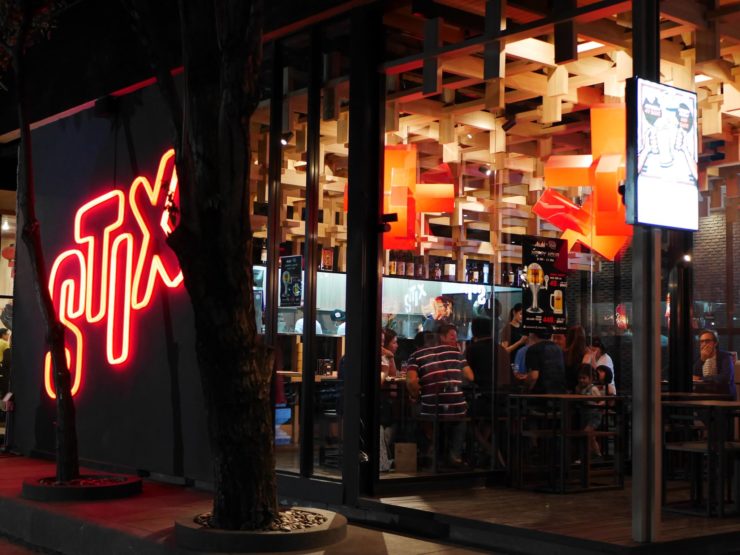 Bangkokians are big fans of Yakitori, it pairs perfectly with beers, are hot and tasty, easy to share and generally on the affordable scale, which makes for a pleasant social eating occasion. 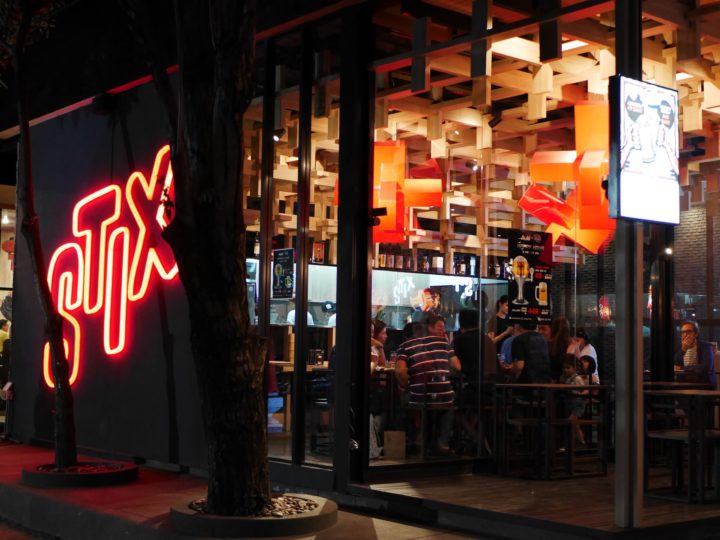 Owner, Eugene, a Singaporean fellow with his Thai partner, also enjoys Yakitori but wasn’t satisfied with sticking with the traditional Japanese style. 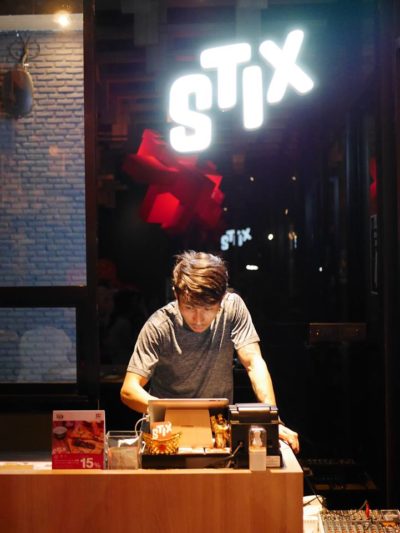 Stix is a new Bar & Grill concept located in Arena of Thonglor soi 10, and unlike the Yakitori we’re used to, they’ve created original recipes based on International flavours. 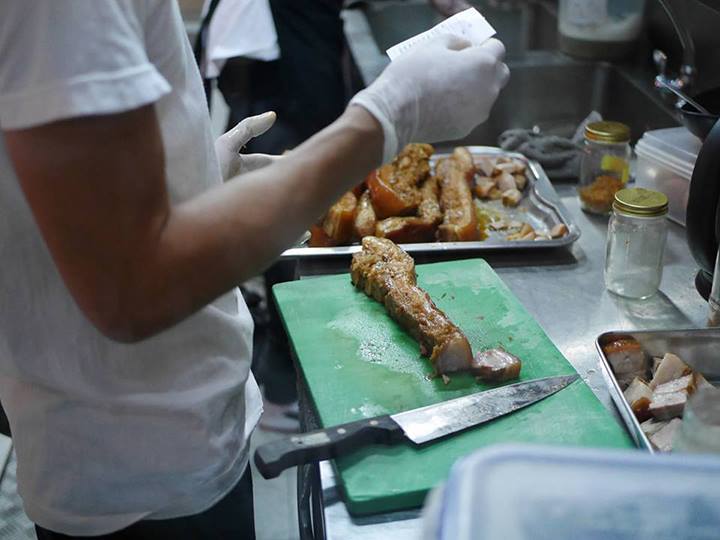 From grilled prawns marinated in Malaysian spices, Thai “Laab Moo Tod” (deep fried spicy meat balls) along with some creative items such as the Bacon Shiso (stuffed bacon kimchi) and usual suspects as the Shitake Mushroom and Chicken Wing. 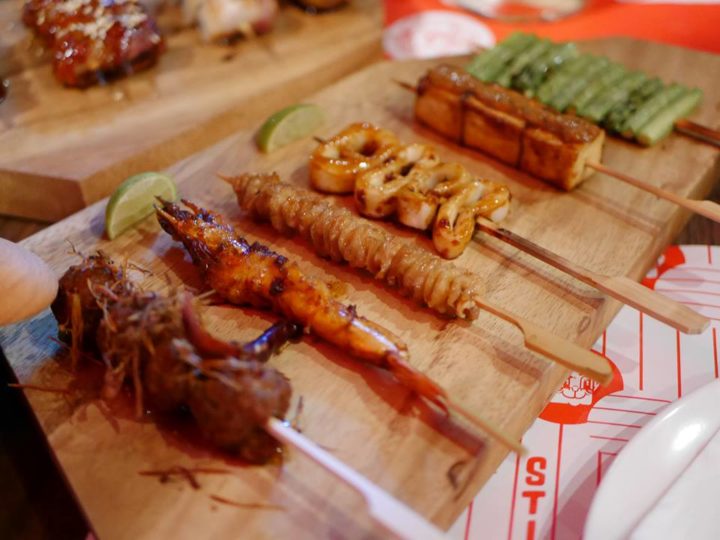 It’s easy to spot, given their enormous illuminated sign which faces Thonglor soi 10 road. The place is smaller than what we expected and wrapped by glass so don’t expect intimacy, but it’s high ceilings and funky modern fixtures of wood beams and red crosses jutting overhead create a fun and relaxed atmosphere. 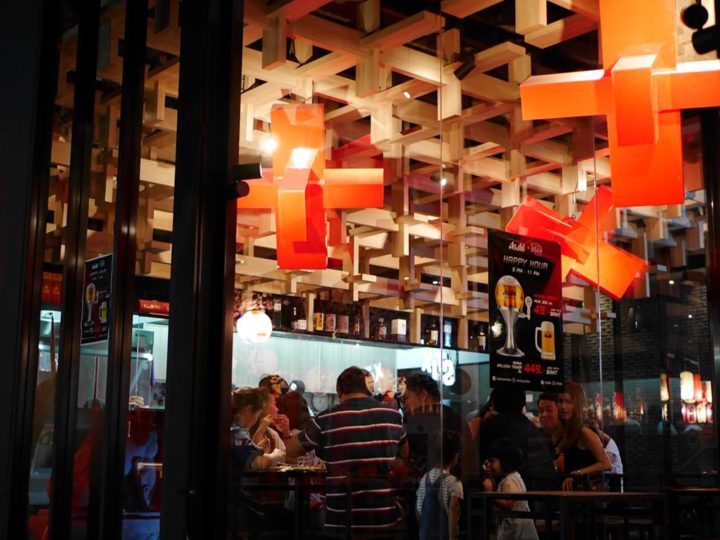 The seats sadly, are highly uncomfortable, basic wood and iron bolted together, but Izakayas don’t generally tend to the pampered tooshies.

We started off with one of the sets which range from 349THB (ideal for 1) up to 789THB (ideal for 2), which we thought were fair considering they also come with chips and/or sides. 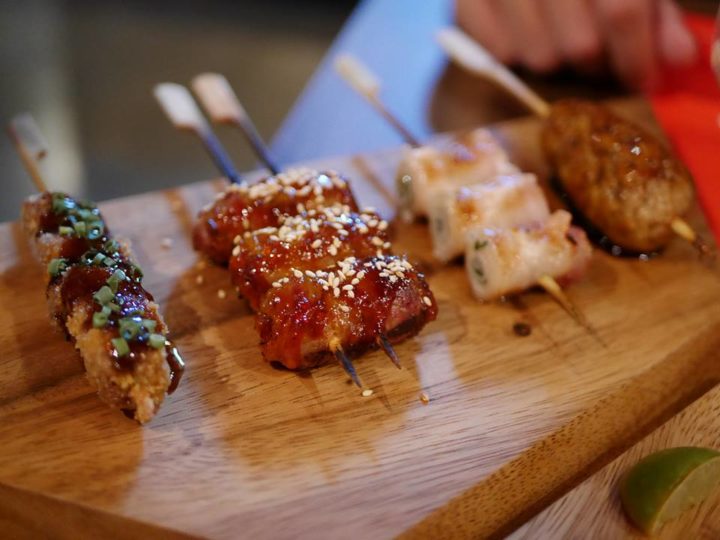 We loved the BBQ chicken skin which was juicy yet un-oily and had a lovely charred crisp, in comparison we wish the fries were a lot less dry and the attempt at Indian-Asian spices were simply lost on us. 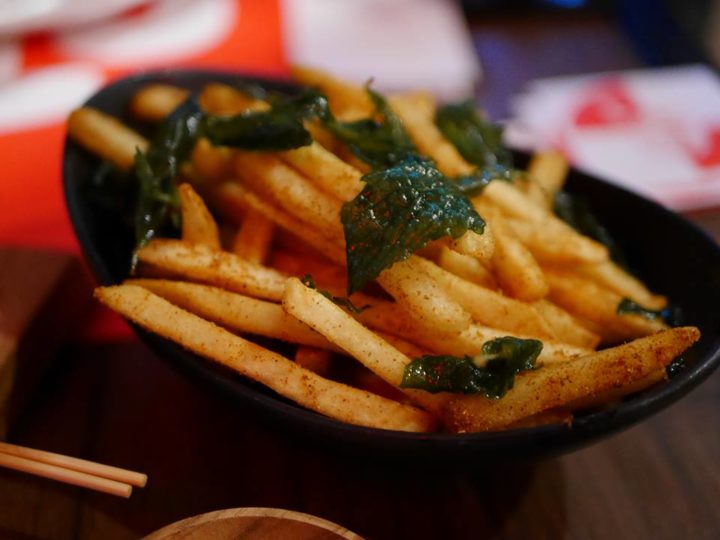 The Bacon Shiso however was fascinating and not like anything we’ve tried before. Firstly was the sensational of hot, soft and juicy bacon then the sour and textural kimchi kicks in. 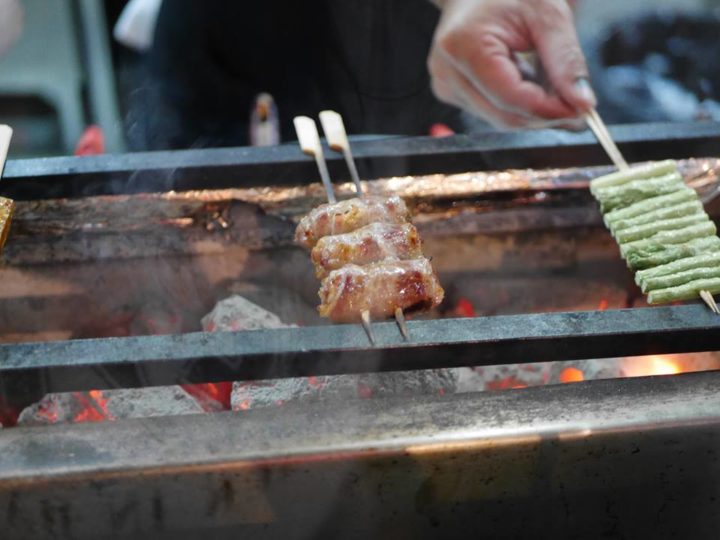 The Prawn was delightful, cooked to a pleasing tenderness and the chili marinate was prevalent but not overpowering, although in terms of value, felt a little measly, considering the 59THB price tag. 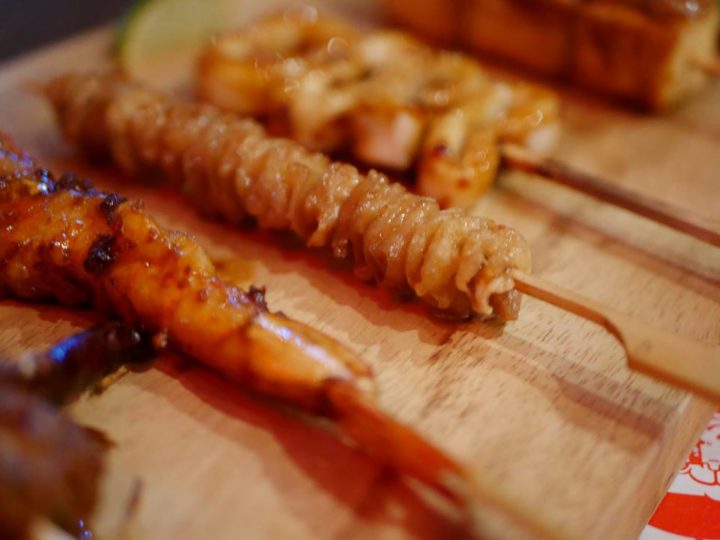 The Meatball by far was the star of the Stix show, which we accompanied with Onsen Egg you’re instructed to dip the meatball into the Onsen. The result? A magical combination of charred hot fluffy meat with the sweet taste and creamy consistency of runny egg. 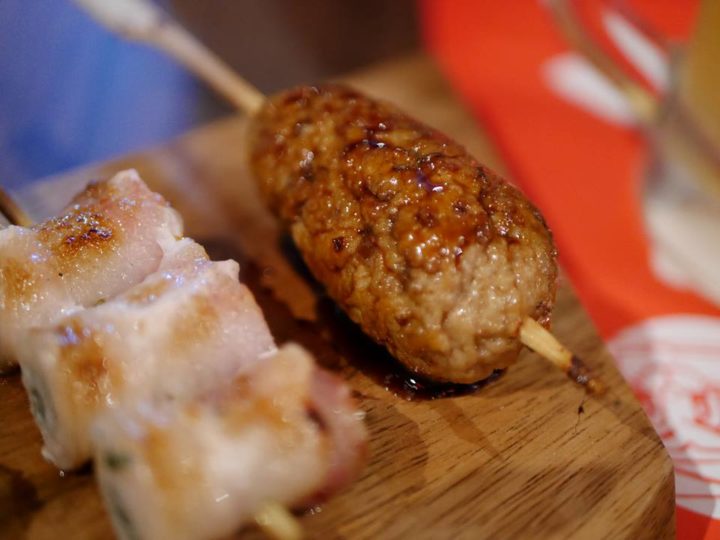 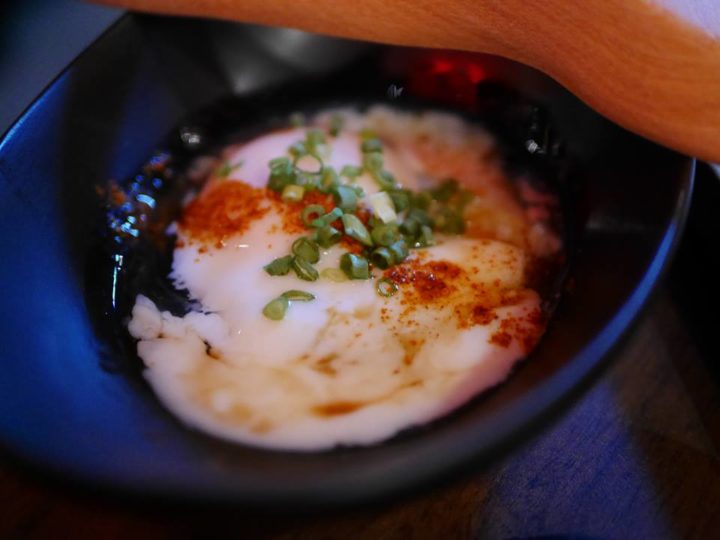 I attempted to order the heart and the tongue to get my fix of traditional Yakitori but these were actually the least attractive items. Overcooked and chewy. We advise you still  stick with the “Stix”. 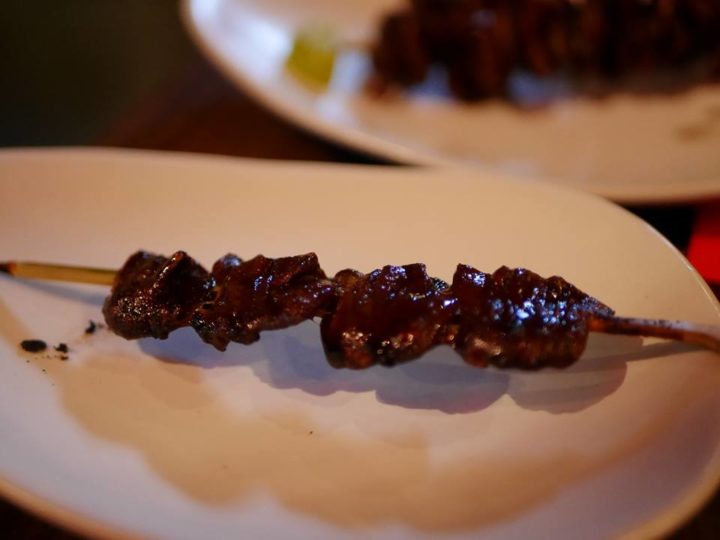 Ok, so I know I said the meatball was the star but that was for savoury. For someone who doesn’t like desserts I fell in lust with their “Horlicks Ice cream Mantou” (89THB) . This dish alone would have me running back for impulse cravings.

A cross between a bun and a donut stuffed with a delicious Malt ice cream and drizzled in sticky sugary glaze. It was sweet but not too sickly, spongy and chewy and utterly,  moreish. 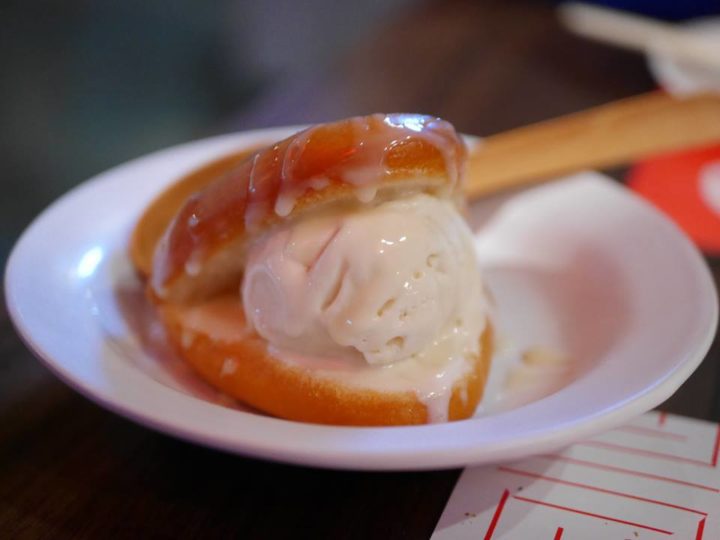 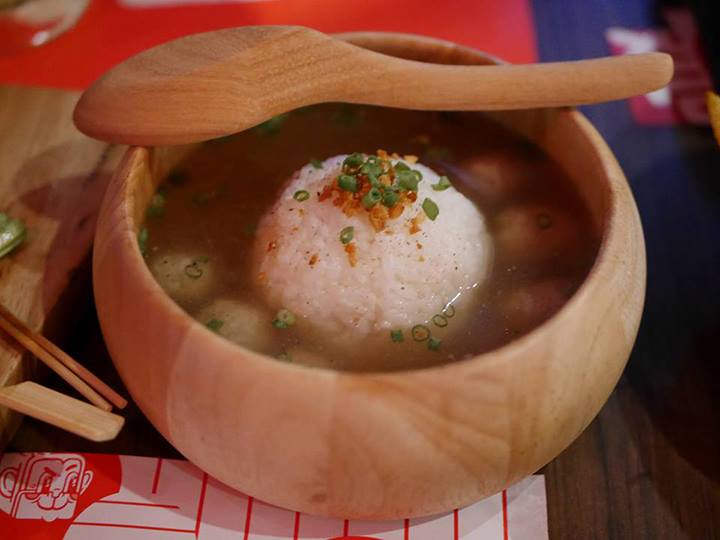 It’s still early days however (only 3 months + ) since they opened, so there’s definitely improvements to be made.

The biggest challenge we forsee is conditioning people out of the traditional Japanese Yakitori mindset. Although we hear they have some elaborate ideas for getting this message across, so now is probably the best time to test and give your constructive feedback. We all know how much Foodies love to do that!

And yes, I suppose we will be back and back with reinforcements, as we hear they have the most bad-ass Happy Hour in town. 49THB for Asashi, to then pair with delectable Asian inspired Stix, it may just become a regular thing.

Go to Stix facebook page to get regular updates on menu and promotions. 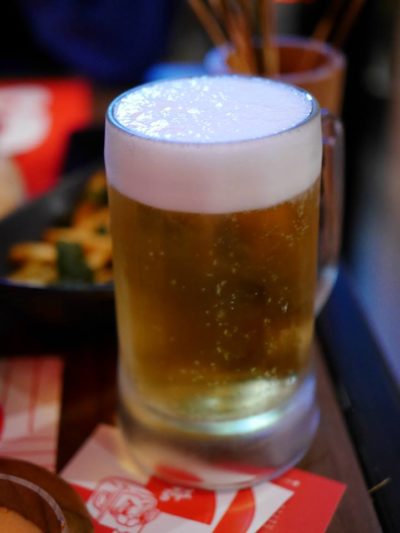