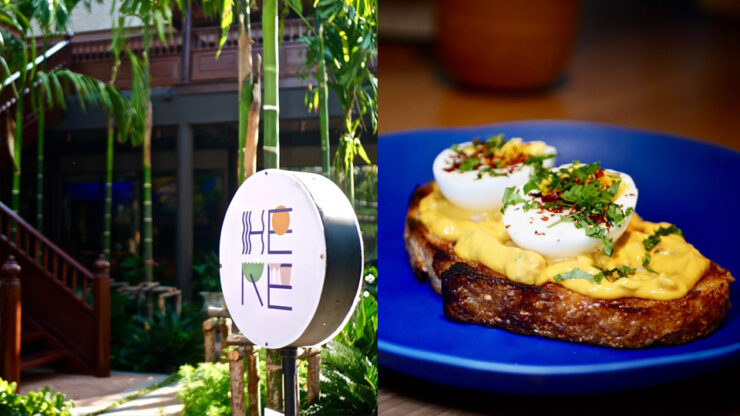 Arguably for many of us foodies and travelers, India’s food culture is one that stands out the most amongst many types of cuisines. While ‘Curry’ is still a generic term used to describe many Indian dishes in Thailand and in the Western world, Indian cuisine is more than meets the eyes especially when it comes to breakfast. More than a standard egg and toast or congee; it’s a culture of their own with regional variations on a dish, unique flavours and secret family recipes.

HERE is a new concept from chef Garima Arora. Her first restaurant, Gaa was rewarded with a Michelin star in 2018, a significant moment in Bangkok’s restaurant industry as Garima was the first Indian woman in the world to earn the title . HERE is where a new journey begins, for those in Bangkok looking to explore the many dimensions of Indian breakfasts.

When it comes to Indian cuisine, the long running debate on what constitutes a ‘curry’ or where it originates from, may just come down to semantics. “That’s British. ‘Curry’ is British. It’s the gravy of the world,” said Garima.

It’s may be surprising for some to discover, that curry has not much to do with India at all! As stated in this article, “In fact, the term curry for Indian cooking is also British in origin ― they lumped all the savory, spiced Indian dishes into one category called curries. You can’t go to India and order a curry ― it just doesn’t exist. There are several possibilities for where the word British word ‘curry’ comes from, one being that it was derived from the word Kari, which is the word for sauce in Tamil, a South Indian language.”

Curry is so British, that one of their national dishes is Chicken Tikka Masala. A British adaptation of Chicken Tikka. The word curry is also used to describe many gravy-like dishes with or without spices. While the reason why ‘curry’ is still being associated with India is still a mystery, although it’s certain to Chef Garima, in technical terms, there’s no ‘curry’ HERE.

So if not curry as most of us would have guessed, what’s for breakfast? One thing universally felt about breakfast, is that it’s comfort food. “Breakfast is always a very big part of India, no matter which part of the country you’re from,” said Garima. “It is the most nutritious meal of the day in the even if it’s off the street, if it’s in a canteen somewhere, it’s always nutritious. It’s have you and it keeps you going for a long time and eating it at home. Of course, your mum’s cooking for you and then she’s taking all the trouble in the world to make sure that it’s fresh, it’s wholesome, it’s the good ingredients. And that’s that’s how we eat breakfast in India,”

The comfort factor starts off with HERE’s breakfast menu, take the Masala Egg Bhurji served with Butter Pav for example. This Indian adaptation of the world’s most loved breakfast is not your average scrambled eggs, it is dressed to the nine with spices, garlic and butter. Take a spoonful and drop it on top of their buttery Pav, an Indian-style bread roll and you’ve gotten yourself a perfect meal to start off your day.

If you’re feeling a little bit more adventurous, you’ll be happy to know that there are plenty more variations on breakfast dishes you can enjoy like the Black Rice Dosa, a famous South Indian dish made from fermented butter, lentils and rice. Homemade Butter, Jaggery Coconut Chutney, Gun Powder and Ghee.

Buy why choose breakfast for HERE’s concept? Chef Garima shared with us: “Nobody was doing breakfast, and what better way to bring forth real Indian cooking. I think the idea was first to give people a taste of real Indian food, how we eat at home, how my mother cooks it, how my dad cooks, how I grew up. Even though it might seem that the idea would be a challenge for people to understand, surprisingly they got it. At the end of the day, if it’s tasty food, I think that’s all that matters. If it’s flavors that you can identify with, if it speaks to you on a basic level, I think you will eat anything that is that easy to understand. Indian food by itself, beyond the ‘curry, is delicious”

As mysterious as the origin of the food at HERE itself, is the location of the restaurant, who would have thought that one can have Indian breakfast in a traditional Thai house right HERE in Bangkok? I found it completely by chance,” Garima said “I think in a sense it’s kind of like the concept of HERE itself; so steeped in tradition, but at the same time, you know, it all has a modern twist to it. Same as with Gaa upstairs, we use all the techniques that are very traditional, but, you know, it’s all presented in a very modern way. So I think it’s good,”

Beyond breakfast dishes, HERE’s all-day dining menu celebrates many faces of Indian Cuisine; from Goan Spicy Beef Tartar to Tamarind-glazed Tandoori Chicken with Almighty Salad. Their selection of Naan Pizzas also combined the taste of India, with the much loved comforting element of Pizza. Don’t miss ‘Naan of Your Business’, Pepper crab, curry leaf oil and house made sour cream topping. Then end the meal with Indian-style Coffee and Burnt Caramel ice-cream sandwiches, which are even made with local Indian biscuit, now that’s comfort food!

Another mystery leaving up to foodies interpretation, is what’s in the name? “I think it’s a lot to do with my style of cooking particularly varies in which part of the world I would be. I guess if I’m here in Bangkok, Thailand, my food will always reflect that. If I were in India, if I were at home in Australia, if I were somewhere else, it would be reflective of the geographical region there. Oh, it’s reflective of here, which is Thailand, which is Bangkok, which is Indian food. All of that together is HERE,” said Garima.

Want to get noticed?! Get in touch with the Foodies Marketing Specialist.

Check out what foodies are currently eating: https://www.bangkokfoodies.com/

Promote or Advertise with us: [email protected]