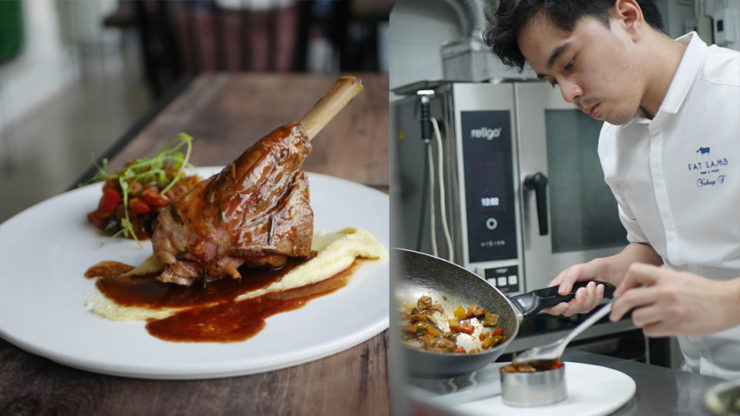 When it comes to the word ‘Turkish’ we often imagine casual hand-held foods like kebabs, shawarmas and falafels but not many would suspect lamb shanks or paella. Well, the good news is a young Chef Tharit Tangsongsirisak AKA Chef Yakup saw the opportunity to twist traditional Turkish dishes, to create a quasi Mediterranean – Turkish style of cuisine which integrates Halal certified produce. 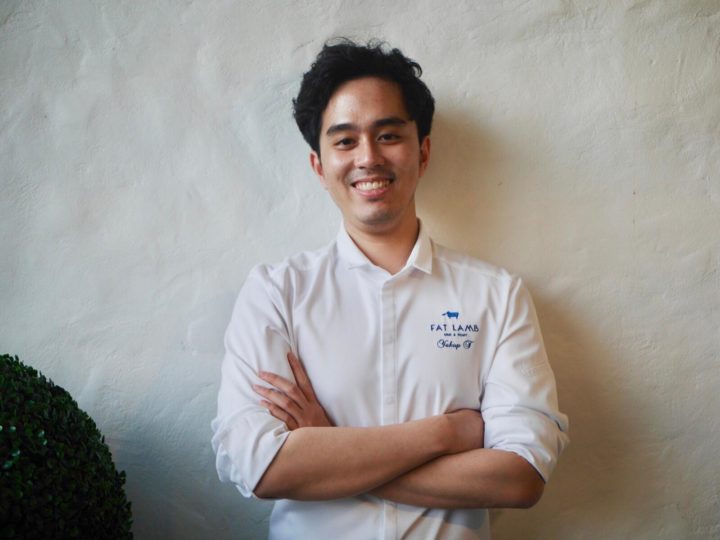 In December 2019 Chef Yakup, with the help of his family decided to open the “ Fat Lamb” restaurant, located in Rama 9 which is known as the heart of the Muslim community in Bangkok. The “Fat Lamb” name was inspired 2 years prior to opening the restaurant, Chef Yakup and his family witnessed a herd of lamb while they were travelling across Europe by train.“They seem cute, fat and healthy, and I decided to name the restaurant Fat Lamb.”

Chef Yakup first fell in love with cooking when he was in Grade 10 when his mother purchased Chef Pongtawat ‘Ian’ Chalermkittichai’s CookBook as a gift. He began his life in the kitchen, first helping his mother then after he graduated high-school, pursued his dream by studying at Kendal College Chicago in Culinary Arts. “In Chicago, I had a great experience with different friends, diversity, different cultures, food. We have sushi, Eastern or Mexican etc. It is awesome and people are open-minded.”

Chef Yakup also had his fair share of Michelin-starred restaurants and celebrity Chef experiences, firstly, working at Naha Restaurant in Chicago, then in Thailand, the chef was mentored by celebrity Chef Ian at Issaya Siamese Club. Chef Yakup ultimately became a celebrity himself when he starred and won Iron Chef Thailand 2019 and appeared as one of the judges in an episode of Masterchef Thailand. The next step was owning his own restaurant.

The restaurant is easily visible from the quiet road, just look for the big red and white striped balloon and large letter signage spelling out “FAT LAMB ” on the facade of the building. After entering, the decor inside is a mixture of ethnic brick ‘a’ brack and old-world European style keepsakes. The white walls are reminiscent of Santorini, the white podiums of Greece, whilst the questionable sequin pillows strewn about add a quirky sense of Euro modernity.

The restaurant is divided into sections where large groups of people may enjoy their own private spaces. Hold a special celebratory dinner in the more secluded glass room, or simply dine at the main dining hall surrounded by eclectic European decor. A highlight you simply can’t miss is the wall draped in silken cloth with woven trim and a single urn on a podium to take some really cool, old-school Euro portrait photos.

Not forgetting those who enjoy the company of drinks, FAT LAMB provides a bar where you can sit and sip mocktails refreshments. Notably, the restaurant provides a praying room where those of Muslims faith can go up to the second-floor room and pray. 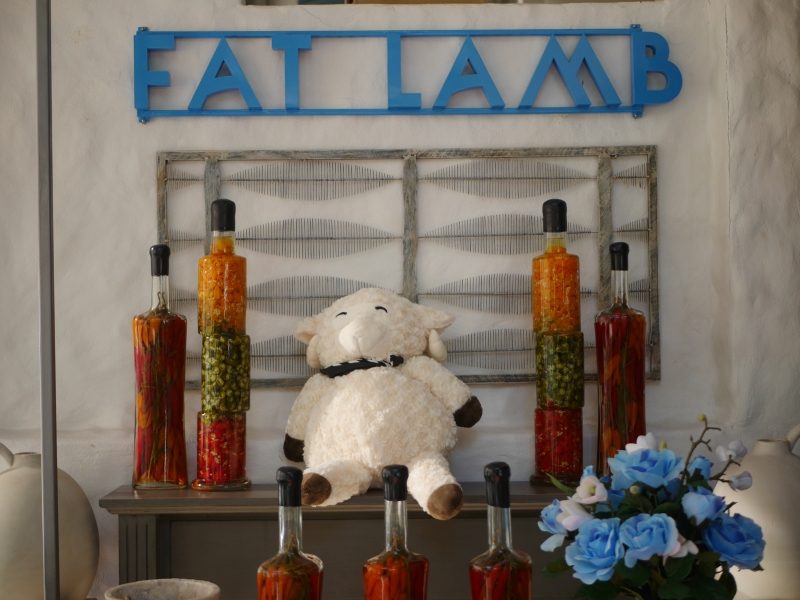 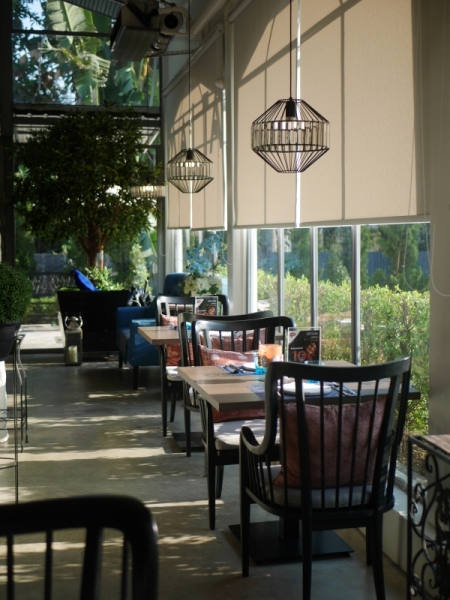 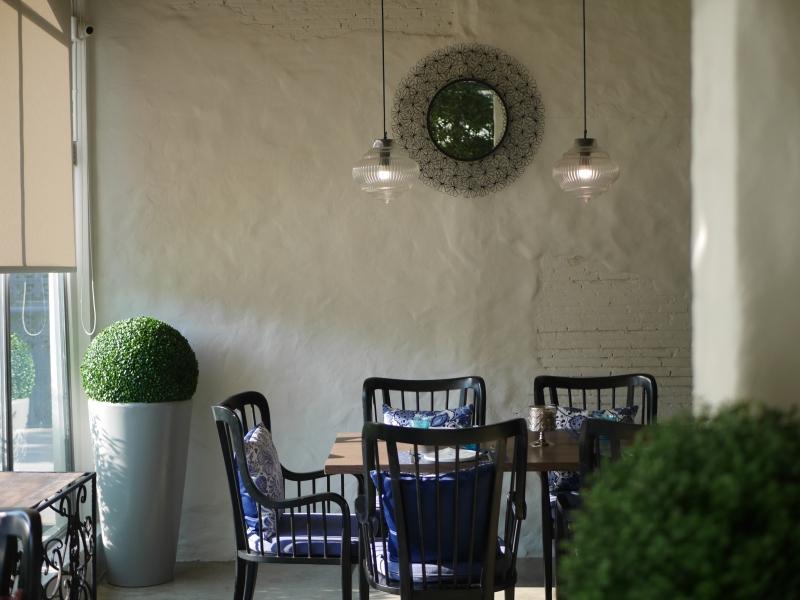 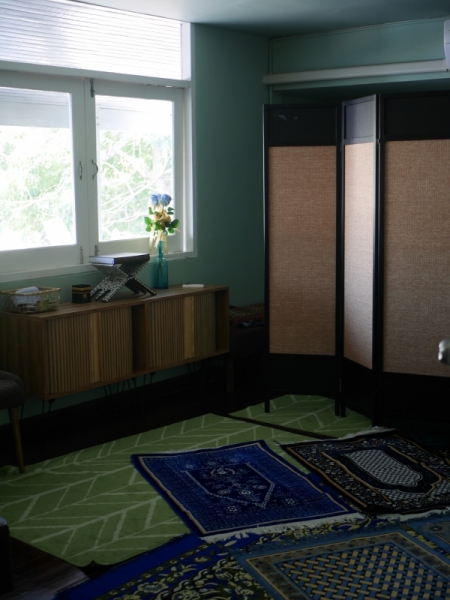 [Show thumbnails]
Although a fairly new restaurant, Fat Lamb was invited to open a branch at Siam Paragon Shopping Mall located in Bangkok’s central shopping district of Ratchaprasong On the 1st of March 2020, Chef Yakup opened a restaurant stand inside Gourmet Market, SiamParagon and unlike his flagship restaurant, the stand offers quick meals like Turkish kebab, Falafel wraps, Hummus dips and meals with rice. This is a first-ever for Gourmet Market, Paragon, providing a space to a vendor serving-up hot halal specific meals.

Although there are a number of Muslims that live in Bangkok, Halal restaurant food is a narrow genre and Chef Yukup wanted to be the first to seriously broadened it. “The Halal restaurant with Hi-end quality does not exist here.” Said Chef Yakup, “Usually, more like a street food style. You know, like biryani with lamb or chicken etc., but they don’t have an upper-scaled halal restaurant.” 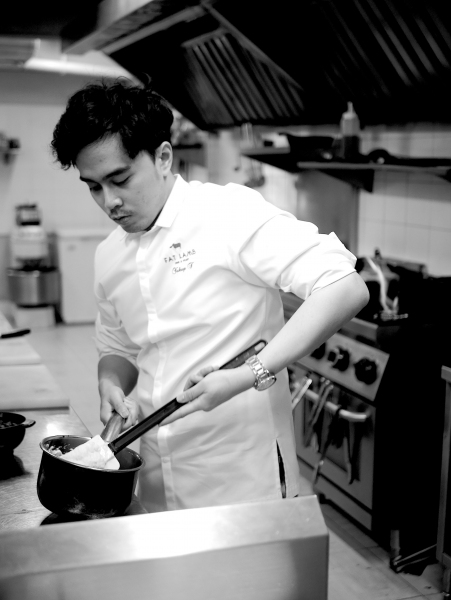 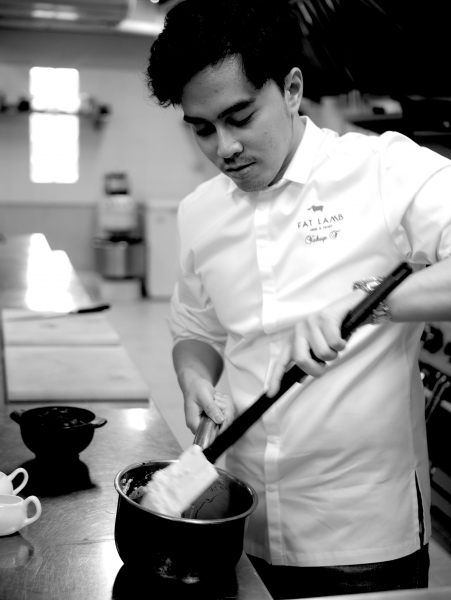 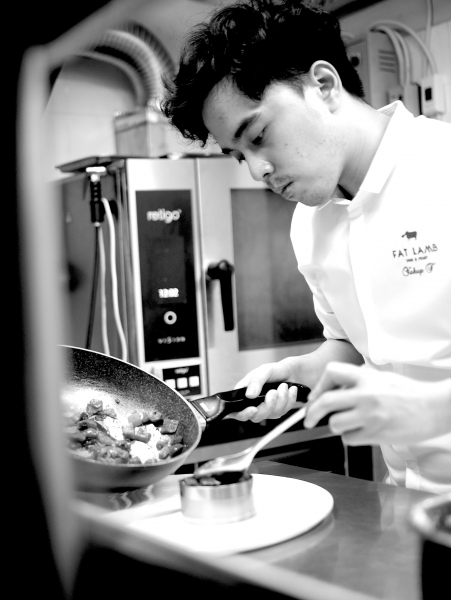 [Show thumbnails]
Still, maybe there is a reason why midscale Halal-friendly restaurants are not in abundance here in Thailand, generally, you would think there’d be are a reason, but it appears Chef Yakup was convinced and decided to take the leap, “Me as a Muslim, I see the market because no one was doing it. I was enduring every day, so bored and so fed up with the repetition of eating only halal biryani, kebabs etc.”


However, how much of us actually understand what constitutes authentic Halal certification? “Mostly, people heard of Halal but very few know what it actually is”, Chef Yakup explains, “In order to be Halal meat, the producers have to raise the animal in a very healthy and clean way.” Chef Yakup explained, “For the slaughter, you must have to say in the name of God before killing the animal. It’s similar to Kosher food that needs the presence of rabbis. For us, we have Imam as a priest and slaughter. They will say the name of God and drain all the blood. We don’t want any blood on the meat. We have to be really dry and clean.

In terms of ingredients at Fat Lamb, the majority are imported, for instance, lamb, beef, olive oil and cheese. The restaurant has a collaboration with Australian lamb producer Mottainai who is famous for the so-called “Wagyu Lamb”. However, Chef Yakup is looking beyond and is always on the lookout to replace what quality local products he can’t find locally instead of importing.

One of the many promising dishes is Mussel Sujuk (440THB) which has a perfect balance of savouriness and spiciness. For those foodies who don’t know what Sujuk is, it’s a spicy Turkish sausage.

The Spanish Paella with Seafood (Size S 400THB/ M 1,200THB/ L 2,400THB), a Mediterranean risotto with juicy mussel, squid and shrimp. It’s like a party of sea creatures in your mouth. If you need some extra sourness, just squeeze a bit of lemon all over.

The Lamb Shank (890THB), a leg of lamb served with mashed potato and Turlu (Turkish version of Ratatouille). Chef chose to sous vide the lamb instead of putting it in the oven in which the meat of the lamb is cooked evenly and easily falls off the bone.

Sultan Fig Turkish Ice-Cream (240THB) is a made-to-order kinda dessert. With the help of nitrogen, the ice-cream can always be made fresh without taking up too much time, except the staff get quite the workout when beating the heck out of the cream. The best part about this, is watching the ice cream form before your eyes

Due to the fact that this place is a Halal restaurant, alcohol isn’t served here but Chef Yakup understands that many foodies need something to pair with their meals or hydrate themselves. Mocktails can act as placebos for those who enjoy the idea of cocktails without the need for alcohol in their systems.

Fat Lamb (200THB), this one is a mimic of a classic cocktail called White Russian. It has a slight scent of coffee and cinnamon. It’s creamy but not heavy, the satisfying milky flavour with complimentary sour notes make you want to finish this drink in one shot.

The rather refreshing mocktail, the Cappadocia (220THB) was inspired by one of Turkey’s famous tourist attractions. ‘Cappadocia’, with its gimmick floating hot air balloon is fruity and fizziness all in one. They add a touch of ginger for some tang and complexity. The mocktail is topped off with homemade pomegranate caviars and garnished with Turkish Delight which makes this drink fun and full of textures.

Oasis Station (220THB) is ideal for a group of people because it arrives in a tower which mimics a petrol tank, alongside a toy car on a tray of sand like that in the desert. It’s definitely one for the gram!

For those foodies out there wanting to try something a little different, and not quite Turkish but embodying the same richness in deliciousness, here is a new and stylish cuisine with the Halal seal of approval. The FAT LAMB experience also allows Muslims and non-Muslims to take a trip around Europe without leaving Bangkok city. “When I went abroad it was an eye-opening experience! There is halal food that doesn’t limit itself to that Muslim food. I was like, ‘What have I been eating my whole life?’”