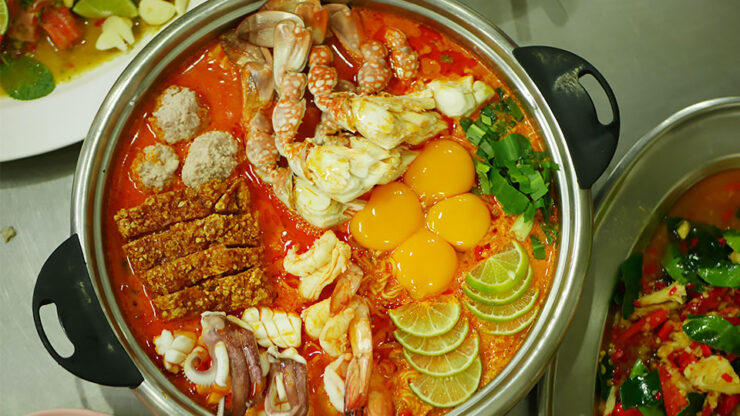 Just one short week away from the MICHELIN Star Revelation 2021, The Michelin Guide Thailand set-off a chain of confusion among their followers once publishing its Bib Gourmand 2021 list, to which eateries in Bangkok city, Chiang Mai, Phuket & Phang-Nga provinces were awarded a lucrative Bib Gourmand.

The reaction to the updated list, not only concerned discerning foodies, aspiring restaurateurs but even Chef’s of Bangkok’s Michelin Star-rated restaurants. The specific use of a noun was what threw a spatula in the works. Specially the part, where the article referred to 4 restaurants which shifted from a Plate status to Bib Gourmand as a promotion. The Facebook post by Michelin Guide Thailand stated, “A total of 106 eateries awarded Bib Gourmand in the 2021 selection, including 17 new entrants, and 4 promoted from the MICHELIN Plate.”

Chef ThiTid “Ton” Tassanakajohn founder of the Michelin 1 Star Le Du restaurant, Nusara private dining concept and Mayrai PadThai, a Pad Thai and Wine Bar hidden behind BAAN Restaurants (Michelin Bib Gourmand), also founded by Chef Ton, had publicly posted the article on his facebook along with the caption, “Congratulations on bibs both new and old in Thailand. Love many of them. Just wondering if Bib is a higher rating than Plate? Because it says “promoted from Plate”  I was thinking it is 2 different categories. Any thoughts?”

Eddie Yii, a prominent local Expatriate blogger from Stranger in Bangkok, responded to Chef Ton’s facebook post, “If chefs are also confused then I think it really needs some clarification. I was also really confused when I read it. Always thought Bib was great and more affordable and Plate was ‘consolation’ for those which are not star level yet but deserve mention”

The Official Michelin Guide Thailand website includes a section which guides their readers on Michelin Guide symbols. To summarise, a Bib Gourmand (lick-lipping Bibendum icon) is regarded as “Not quite a star, but most definitely not a consolation prize, the Bib Gourmand – named after Bibendum, the friendly Michelin Man and the official company mascot for the Michelin Group – is a just-as-esteemed rating that recognizes friendly establishments that serve good food at moderate prices.” The guide goes on a little further to explain that, “…. Michelin inspectors have noted the increase in the number of restaurateurs dedicated to providing authentic dining experiences by way of quality cuisine at affordable prices in approachable and friendly establishments.”

Meanwhile, the website’s description for a “Plate” (knife, fork and plate icon), simply states, “In the latest 2016 edition of the Paris guide, a brand new L’Assiette or The Plate symbol was launched to recognize restaurants that ‘simply serve good food’.” Although no indication was made if one distinction were in higher rank or positioning than the other.

Eddie Yii further expresses his perplexion on Chef Ton’s post,”… if there is movement of restaurants from one category to the other, surely it signifies and “upgrade” or “downgrade” unless there is a stark change to the restaurant itself, just that in this case, most probably didn’t expect a move from Plate to Bib to be an “upgrade”?

Bangkok Foodies on a search to find foodies and chefs the answers to their burning questions, spent 15 minutes with a Michelin representative over the phone in regard to the matter. The Michelin Guide representative most kindly and patiently explained the distinction mostly to enlighten us on the fact, that restaurants in the Bib Gourmand category must fit into a pricing criteria of starter, main, dessert, under 1000 THB (or otherwise 3 course), but in the end our comprehension of why restaurants bestowed a Bib Gourmand from a Plate, was considered as a “promotion”, we were still none-the-wiser.

Rex Baay, a local foodie and our go-to guru for fine dining restaurants recommendations in the city, told Bangkok Foodies, “It is only this year that the term “promoted’ has been used when re-classifying a restaurant from being a Michelin Plate to a Bib Gourmand. I know this causes confusion since we were led to believe that both categories are equal. However, in Asia, especially in Thailand where street food is good and cheap. We can assume that these places will be listed automatically as Bib Gourmand, but that is not the case. There are Bib Gourmand and Plate categories for streetfood shops and as well as the proper restaurants. Personally, I always thought that Bib Gourmand is higher than Plate, because they get special citations during the award ceremony every year”.

Rumours quickly spread among restaurant industry folk, given the belief for some that Bib Gourmand was to be the next desirable accolade when a Star could not be attainable, the logic was that finer establishments could look to adopt a strategy of reducing their menu prices to fit the 1000 THB bill. Chef Tim Butler, Chef and Owner of Eat Me Restaurant, had made a playful jibe on the Michelin Guide Thailand’s Facebook Page’s post, “…so if you drop your prices to under 1000 you get “promoted” lol”.

However, we were adamantly assured by the Michelin representative this tactic would not sway the basis of an inspector’s judgement. Some industry whispers also speculated that the sudden Bib Gourmand spotlight, was a strategic move to promote the lower to mid-end eateries in Bangkok to COVID-19 conscious diners and pander to mass mainstream sponsors, but if that were ever the case, where would that leave the fine dining industry? More pressingly, where does this leave current Plate holders in the scheme of things?

Rest assured, we don’t relent to any idle gossip. Bangkok Foodies were promised an official statement which was promptly delivered after the phone conversation, because only the words from Michelin Guide themselves could clear up this conundrum…..or not. We will leave it up to you, the foodies to decide.

Bangkok Foodies would also like to take this opportunity to say to all restaurateurs, food & beverage staff, chefs and those involved in the food and food service industry the very best of luck to those looking to acquire a Michelin Guide Star status this Wednesday 16th December at the MICHELIN Star Revelation Press Conference & Gala Dinner at Four Seasons Hotel Bangkok at Chao Phraya River. There has been much debate about Michelin Guide’s inclusion to Thailand, but as a community, we believe spotlighting the local gastronomy scene onto a world stage, whilst pushing people to greatness can not entirely be a bad thing, and for those who don’t win the lucrative Star, Bib Gourmand or Plate, nevermind, there’s always the millions of Bangkok’s foodies to support! #EatitForward.

Below is the official statement on the differences between Bib Gourmand and Plate.

Restaurants that are listed under Bib Gourmand and Plate are recognized in MICHELIN Guide as simply good food that MICHELIN Inspectors recommend to the guide readers.

Plate is defined by good cooking, fresh ingredients, well prepared; simply a good meal at whatever price point. While Bib Gourmand is described as not only just good quality cooking but also offers diners at less than THB 1,000 for a three-course meal, excluding drinks, making it valuable for the money spent.

Restaurants which are promoted from Plate to Bib Gourmand have shown their development in quality cooking that is valuable for the price of less THB 1,000.

In addition, restaurants under Bib Gourmand and Plate have equal opportunity to be promoted to MICHELIN Star if they are qualified by the five criteria used to rate the quality of the food by the MICHELIN Guide.

Read about what the MICHELIN Guide’s symbols mean here: https://guide.michelin.com/th/en/to-the-stars-and-beyond-th