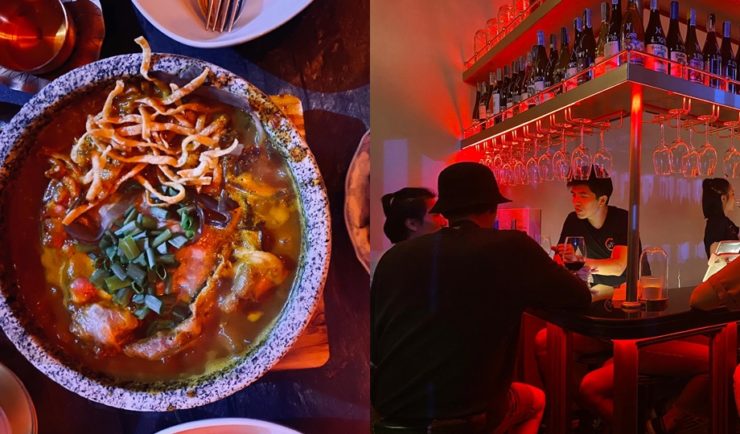 Tha Tian District is a touristic destination, known for temples, shrines and Royal Palace. The district is renowned for its Thai-Colonial architecture, remnants from a time that flourished during the era of King Rama V. Mayrai Bar turned one of these historic buildings into a place where people could come and enjoy a selection of quality natural wines and Chef Ton’s more edgy dishes.

The interior of Mayrai Bar is basked by a red light filter which gives off an almost sensuous vibe, not dissimilar to a scene in Wong Kar-wai’s movie, “In the Mood for Love”. If you haven’t watch Wong Kar-wai’s movie then this is your opportunity to do so, there’s a strong resemblance in the decor and atmosphere.

Chef Ton is no stranger on the culinary accolades circuit, he earned his first star in 2018, Le Du was ranked No.14 in Asia’s 50 Best restaurants 2018 and in the year 2019 at No. 20. Chef Ton has always been inspired by his grandmother’s cooking, where his passion led him to the United States to pursue his dream of becoming a chef. There he graduated from The Culinary Institute of America with the highest scores in his class.

Compared to Le Du and Baan [บ้าน] (another establishment under Chef Ton’s expanding empire), we could say that Mayrai Bar is the cheapest joint under Chef Ton’s jacket. Well, Pad Thai Mayrai, one of his signature dishes costs only 79 THB NET and Chef Ton uses only local and organic ingredient. Comparatively, the price is very fair.

A lesser-known dish which the curious foodies will appreciate is the Khao Soi [ข้าวซอย]. Khao Soi is a Northern native dish. You will find it in the form of a thick curry noodle soup, with either chicken, beef or mutton. Chef Ton is passionate about recreating local Thai dishes, with an acute amount of creativity, and this one version of Khao Soi no exception.

Remember we mentioned local ingredients? Thai “Wagyu” is one of the main ingredients in this Khao Soi concoction which utterly makes your mouth water. The curry soup is deeply flavourful, the aroma of the turmeric and fingerroot emanate from the hot stone mortar to which it is served.

But what truly makes this Khao Soi special are two things; the degree of coconut milk, a perfect balance without oiliness, a common practise that other restaurants tend to over-do. Secondly, the not-so-secret ingredient, the rich and thick bone marrow which is cooked within the soup broth.

Although though this bar has quite a selection of natural wines from Australia, New Zealand and South America, for wine lovers to enjoy and pair with piping hot noodles, you should also try — at least just once —  Mayrai Bar’s Ya-Dong [ยาดอง]. Ya-Dong is a Thai elixir, contains herbs and botanicals. It can be also be used for medicinal use.

What so unique about Mayrai bar’s Ya-Dong? Well, this potion isn’t hard to consume as compared to your typical Ya-Dong stalls on Bangkok’s streets with snakes and creatures fermenting inside the clear bottles. This Ya-Dong at Mayrai is rather sweet and aromatic, filled with ginseng which you can detect without sipping, plus it embodies 11 local herbs and botanicals. Believe it or not, the recipe is certified by the Chinese Medicine Association of Thailand!

Another factoid you may not know about our Chef is that he’s actually a trained sommelier. After graduation, Chef Ton worked at many Michelin-starred restaurants in New York City, including Eleven Madison Park, The Modern, and Jean Georges, where he developed his passion for wine and received the Certified Sommelier recognition from the most prestigious organization, the Court of Master Sommelier during his time in New York City.

When asked why did he open this bar, he simply replied, “I just want people to enjoy quality Thai food at a reasonable price. ” He continued, “Well, many Thais have a bad perception of Thai food that it is cheap and plain. In Japan, comfort food there has value because chefs and cooks there are using only quality ingredients and respect the art of cooking. I want Thai food to have this value, this is why I opened this bar.”

Wariya has a strong passion for cocktails, and you may have met her several times but she likes to keep it casual and low-profile. She also likes to enjoy quality tea, especially Japanese green tea.