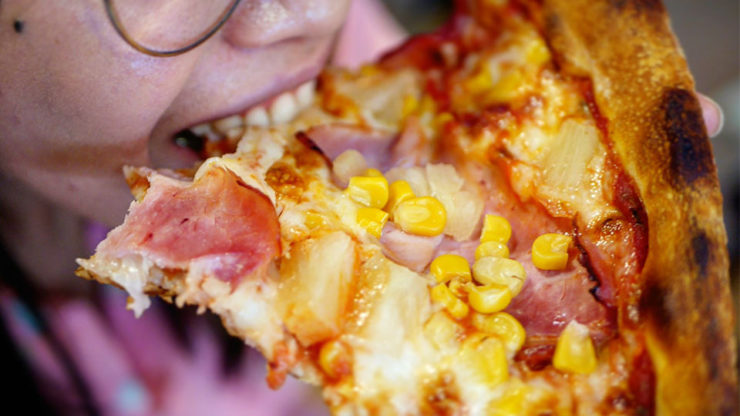 Pineapple or not to pineapple, that is the question.

There has been a debate on whether Hawaiian pizza or pineapple pizza is an abomination or a blessing. Many, especially, the Italians have a strong belief that this kind of pizza is disrespectful to Italian culinary culture. Well, since they were the ones who invented pizza, I guess the sense of ownership is inherited, along with that charming Italian bravado.

A non-Italian celebrity Chef, Chef Gordon Ramsay did, however, have something colourful to say about it and with 107K reshares and 156K likes, he was not alone, along with many other local restaurateurs and industry folks.

Filippo Cassabgi of Business Manager Sanpellegrino Thailand when asked “What do you think of pineapple pizza”, replied “You wanna ruin my day? It’s a blasfemia, don’t ask me anymore ahaha”, Nicolino Pasquini owner of L’OLIVA Ristorante & Italiano Wine bar restaurant in Bangkok had a more scientific debate when it came to pineapples on pizza, “I would never combine pineapple, which is a highly sugary fruit with a leavened product like pizza, sugar stimulates fermentation and this may cause that sense of swelling that often happens when pizza has not been leavened adequately… I would never match a very sweet fruit with a product that theoretically can still be in fermentation and induces the overproduction of acid in the stomach.” However Chef Stefano Borro of Enoteca Bangkok, could only reply with a * 🤮 *.

Pineapple does not go on top of pizza….. https://t.co/lhD6aliOV8

But does putting pineapple on a pizza is a heinous crime? Well, To be fair, not all of the people from the food industry agree to what Chef Ramsay has to say. Alton Brown, Host and Main Commentator of Iron Chef America and Cutthroat Kitchen is one of them.

Before we slam the gavel hammer whether putting pineapple on the pizza is right or wrong, we should start with some background and get to know more about this controversial dish. 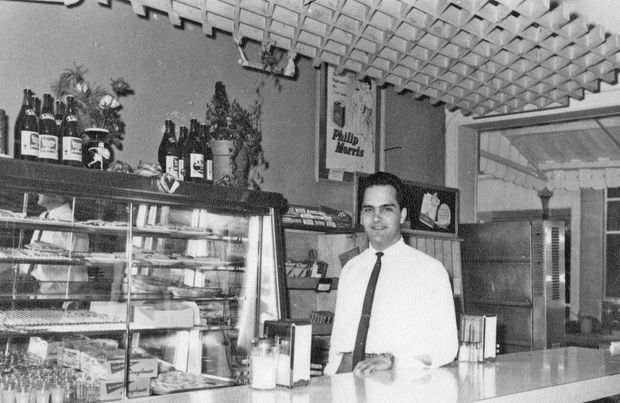 Although it was named ‘Hawaiian’ it doesn’t come from the place or was created by people of Hawaiian descent. Sam Panopoulos claims that he’s the one who created it at Satellite Restaurant in Chatham, Ontario, Canada in 1962. He was fascinated by the Chinese culinary preparation which mixes sweetness and savouriness together, such as the ubiquitous “Sweet and Sour” dishes. He experimented for some time before his pineapple with traditional tomato sauce, cheese and ham or bacon became popular locally and eventually, globally. As funny as it is, the name ‘Hawaiian’ came from the brand of the canned pineapple that he used.

Members of Bangkok Foodies OFFICIAL community were brave enough to stand up against the violent memes to show their appreciation for the sweetly savoury pie, avid foodie Olivia Wycech commented on one photoshopped-altered post depicting an Italian gangster from the famous movie “Casino”, being force-fed pineapple pizza, saying “ LOVE IT and drowning in hot sauce. It must be because I’m Canadian – they say the Hawaiian pizza was actually invented in Canada”, Kabir Sebastian Orlowski, Owner, Pastry Chef and Founder at The Secret Garden Café Songkhla also said in defence, “I love pineapple on my pizza 🤷‍♂️Not canned one but fresh. Tum ChaiPat, a well-travelled foodie from Thailand chimed in with, I literally love everything on pizza – pineapple included! 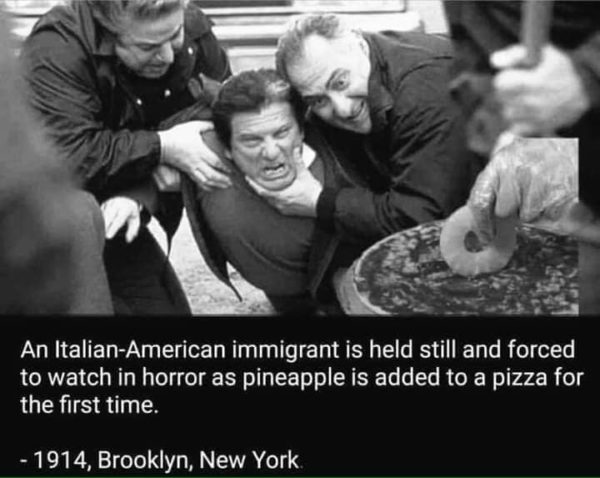 Another Thai, Pongpak Sudthipongse, Global Winner of Glenfiddich’s World’s Most Experimental Bartender 2019, who clearly knows about palatable flavours said “From my point of view, I think pizza is like fried rice which you can put anything that you like in the pan along with rice. The key point on making good Hawaiian pizza is the pineapple shouldn’t be too juicy and it should have a caramelised odour when out from the oven.”

Shhh no one needs to know from r/PewdiepieSubmissions

The Bangkok foodies team, fed up with all the fuss, decided to face adversity aka “the pineapple-pizza haters” and took to the pineapple-pizza challenge. We tested out 5 of Bangkok’s new and signature pizza brands supplying “Hawaiian Pizzas”, both mainstream and artisanal for those curious to try – God forbid.

Pineapple Pizzas and Where to Find Them:

The pizza has very thin-crust which is all good and fine. The pineapple and ham are shredded which gives an overall coverage to the pizza surface and hence, every bite will be one of a Hawaiian taste-sensation. This gives it a definitive sweet and sour balance but not much complexity. The sauce and cheese were more like the backup dancers, necessary for the whole show but not particularly interesting.

This pizza joint makes absolutely enormous pizzas. The crust is just right, not too doughy or hard. The base is also quite firm, not sloppy like with others, but the quality of ham was better than most, not the mass generic type which comes pre-cut in strips, although it did overshadow the pineapple which was of the mild-tasting canned variety. What we were quite shocked to discover was that the pizza top was littered with corn kernels, but foodies will be happy to hear that it added a delightful sweetness and texture. Yes, we were surprised too.

The pizza base and edge have a slight char which provides an added smokiness. Was it intentional? I guess we will never know but it provided a pleasing aroma and bitter dimension to the pizza. The generous amount of sauce soaks into the base which does not do it any favours as the cheese isn’t particularly tasty. Although it must be said, Pizza Artisana’s most valid point is that the pineapple is fresh!

Another uber thin pizza which basically has no crust which is perfect for people who are criminally leaving it discarded in the box. The sauce is juicy and heavily seasoned if a bit sweet but some people like that. The flavours that hit you almost immediately but the downfall to juicy pizza is that it softens the thin-base making it limp, plus there wasn’t any of that pizza smokiness to speak off.

Doughy, tasteless, no char at all.
“This pizza is sad”
– Anonymous staff – 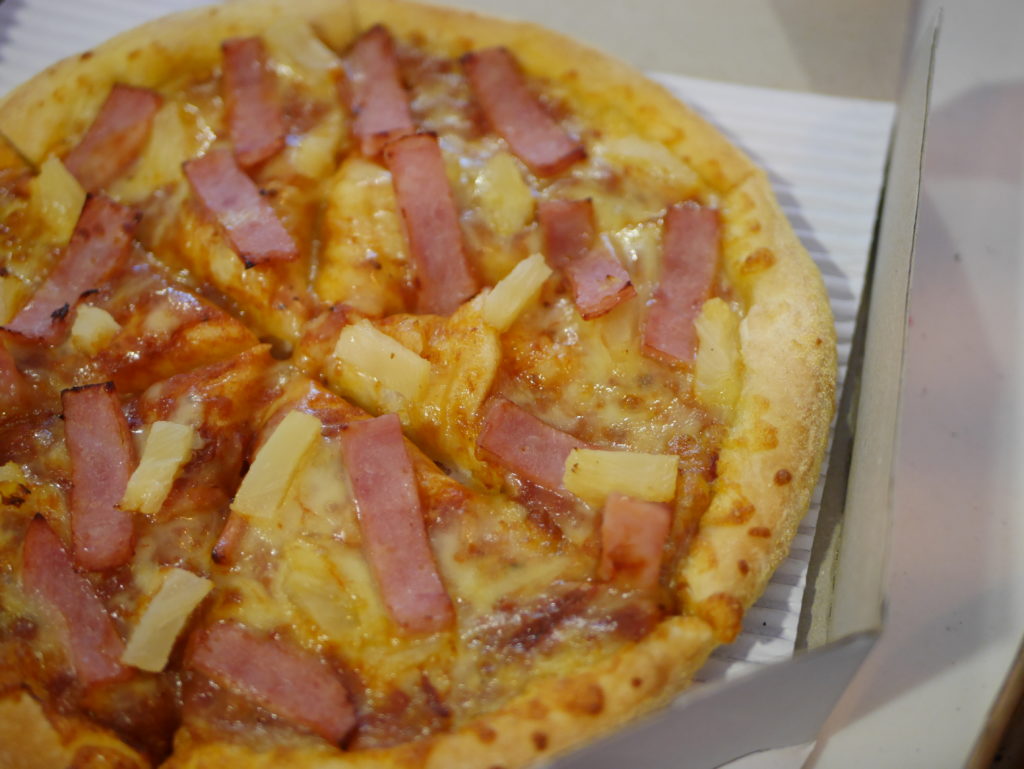