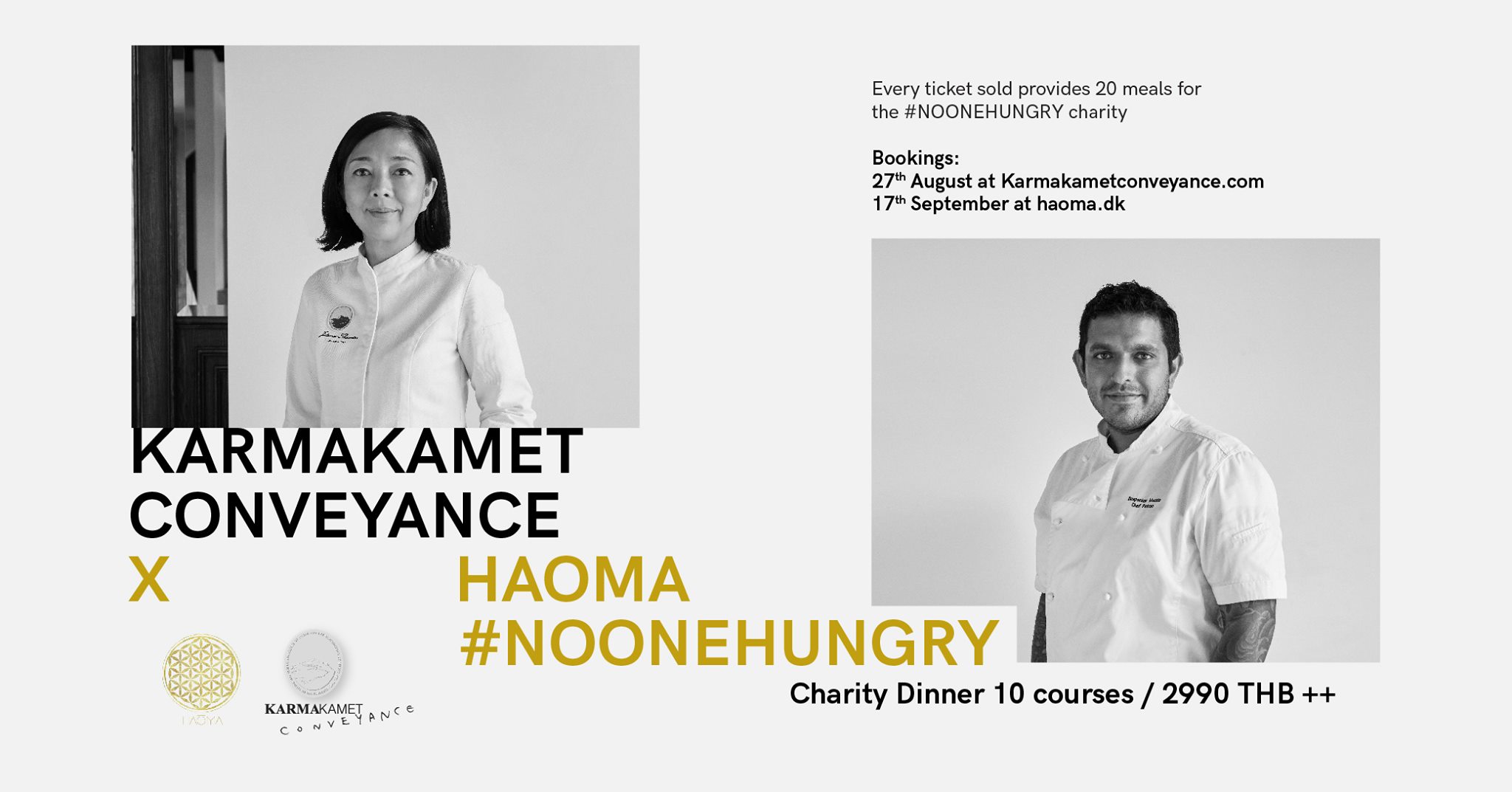 Chef Deepanker “DK” Khosla of Haoma and Chef Jutamas “Som” Theantae of Karmakamet Conveyance, come together for two nights (27th August 2020 at Karmakakemt Conveyance and 17th September 2020 at Haoma), to create a spectacular West Bengal Indian regional menu.
The collaboration will see a donation of 20 meals to Haoma’s #NOONEHUNGRY cause for every single ticket sold. The theme of the dinner will be inspired by the verses of Robindronath Tagore’s poetry and devoted to his message of humanitarianism and feeding the hungry.
The Karmakamet Conveyance x Haoma #NOONEHUNGRY Charity Dinner.
17th September at Haoma
Charity Dinner 10 Courses / 2990 ++
Wine available by glass and bottle.
Bookings:
27th August at Karmakamet Conveyance: karmakametconveyance.com
17th September at Haoma: www.haoma.dk
Seating times: 6:00pm and 8.30pm
**************************************
“Tagore speaks a lot about his love for food, and having large amounts of people being nourished. Nourished through art, nourished through food, nourished through poetry, nourished through compassion. Som and myself, have lived and studied in India, and work with Indian cuisine and Tagore, is like a ‘Father of India’ ” – Chef Deepanker “DK” Khosla.
***************************************
The #NOONEHUNGRY campaign in Bangkok was initiated by the Chef DK after the devastating effects Covid-19 had in Bangkok, not only unto his business and his staff but for the low-income individuals and families who lost their jobs and livelihoods. The #NOONEHUNGRY campaign calls out for assistance by three means; Firstly is by local chefs donating their time and skill and resources to cook for the city’s migrant workers who have no income to speak of. Haoma provides ingredients for the meals, but require the chefs to cook the food and wrap in banana leaves, to be send back to Haoma, the #NOONEHUNGRY distribution centre. Chef DK and the team targeted for 1,000 meals a day or more – so far – Haoma have distributed 55,000 meals. Secondly the #NOONEHUNGRY cause looked to reach out to the public with either a monetary contribution or by donating ingredients and lastly by asking those to share the cause or simply tell friends about it.
At 3 years old Chef DK attended a Tagore public school at Kindergarten, and as an Indian native, Tagore’s philosophies have been deeply ingrained into the Indian culture. The words of Tagore have continued to affect the way in which Chef DK sees the world and later into his adulthood with his approach to food and cooking. Chef Som herself, spent six years studying in India at the Visva-Bharati University, Santiniketan, founded by Tagore, and graduated with a B.F.A. in Lithography. Importantly, it was the place she called ‘home’ at that time, she began to cook. Chef Som’s first encounter with Tagore actually began a lot earlier, when a piece of Tagore’s literature had found its way into her hands as a child, having a most profound effect.
Chef Som and the Karmakamet Conveyance team, have already contributed 200 meals to the #NOONEHUNGRY campaign prior to dreaming up this collaboration together which seemed a natural move, given both Chefs strong ties to India, spiritual connection with Tagore’s work and desires to provide charity for those who may need it the most.

The event is finished.