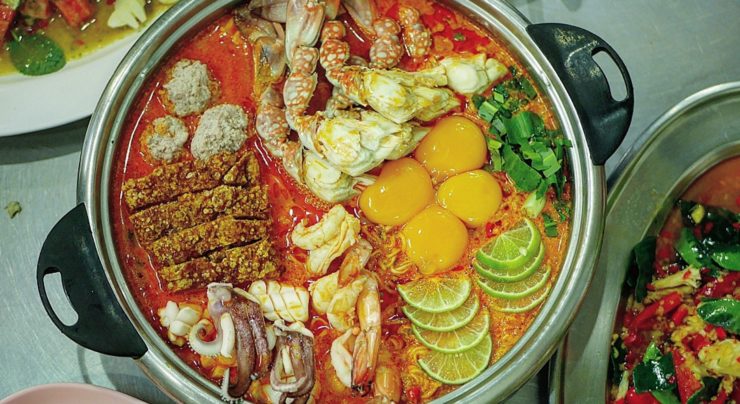 There was a time when people stood in a queue for hours waiting for their turn to sit and eat Bangkok’s epic “Mama” dish in Samyan district, a dish which became popular not only locally but with visitors from all across the globe who were willing to wait for hours just to get a little taste. Thank you, internet!

For those not familiar with “Mama”, pronounced “Marr-Maa !” It’s a snack every Thai recalls from their youth. It was either crushed by hand, still in its packet and sprinkled with the seasoning which came as part of the dehydrated noodles. The tiny silver and red packet filled with the powdered spicy seasoning had jagged edges for easy tearing, along with an additional clear sachet of oil and paste. Mama could be eaten raw (medically not recommended) or traditionally as a bowl of noodle soup, commonly with an egg dropped in, until it bubbled into a wet scrambled egg or was “poached”.

It was and still is the tasty and affordable snack which broke social barriers it was eaten by the rich and poor, young and old. There are even social media pages with hundreds of thousands of followers dedicated to its invention. Although laden with starch and packaged with msg heavy-seasoning, “Mama” to the Thais, are what boxed Cheerios became to the Americans. This fantastically famous brand of instant noodle named “Mama”, became the term Thai people use to describe every instant noodle

In the early 70s, the first brand of instant noodle was Sanwa (now defunct)(ซันวา) then brands like Yum Yum (ยำยำ), Wai Wai (ไวไว) and Mama (มาม่า) followed but the brand, Mama, quickly gained more popularity than the others.

The Mama brand was officially born on 15 February 1972 with the release of Mama Chicken Soup flavour Instant Noodle in 1973 but this flavour was discontinued some years later but does come back as a limited edition for good-old-time’s sake. 2 years after the release of the chicken, the Minced Pork Soup flavour was introduced and – is still today – one of the best sellers in Thailand. In 1980, the most beloved Mama’s flavour, Tom Yum Goong (ต้มยำกุ้ง), with its extremely badass 80s’ silver packaging, was launched and the rest, as they say, was history.

The hype about Jeh Oh Chula or Jeh Oh’s Khao Tom Ped (เจ้โอว ข้าวต้มเป็ด) their official name, started in early 2015 after Facebook and Instagram became the universal reference to fashionable food and well… fashion, but this Mama doesn’t look or taste exactly like your average Mama we cook at home. It was the meal typically made in hunger and desperation after spending a hard-earned salary at the end of the month or an abundance of Thai whisky and sodas.

The way that Jeh Oh’s has created and built their Mama presentation and recipe, has pioneered a whole new micro-foodie culture in Asia. Jeh Oh’s Mama dish is enormous to start, served inside a Thai Suki Hot Pot is Jeh Oh’s homemade thick Tom Yum soup topped with minced pork balls, seafood, slices of lime, raw egg yolks with an option of housemade crispy pork for those seeking some extra fat and crunch. All this for 800 THB Nett / 25 USD which may appear extraordinary for your average Thai but it didn’t stop the struggling students, saving their allowances to line up late at night to share a bowl with their classmates. This dish is only served after 11pm at night.

The family who have operated for 53 years, now run by the third generation, Siri Chaitawee AKA “Hia Gao, who created the elaborate Mama instant noodle dish. Hia Gao’s paternal grandfather and grandmother started the business as a hawker selling boiled rice with duck, and duck braised soup in 1967. When they saved enough money they transformed their hawker stand into a store at Suan Luang Market (today, it is M Park Building). After Hia Gao’s mother (Jeh Oh) married, she helped his father’s family to further develop the business. She became the matriarch of this establishment and created other side dishes for Boiled Rice (Khao Tom [ข้าวต้ม]).

As a child, Hia Gao and his siblings have been part of his mother’s “crew”, watching his mother work relentlessly to feed the whole family. “Even though she’s an in-law, she took care of everything. I guess because her family used to sell some sweets and snacks so cooking has always been part of her.” Hia Gao said.

After standing tall at Suan Luang Market for 47 years, They had to move to a new place on Soi Chula 22, and the name “Jeh Oh’s Khao Tom Ped” emerged. The restaurant was named after Hia Gao’s mother. But Hia Gao and his whole family were devastated when they received an official notice that there was a city development plan for the area they were working and living in. Like fate continuing to play tricks on them, the family were forced to move – yet again – after staying at Soi Chula 22 for almost 4 years. This spot is now part of the new and flashy Samyan Mitrtown Mall.

The famous dish, Mama Oh Ho, was never intended to be on the menu. It was simply a dish Hia Gao made for himself after work and sometimes he made it for his friends or customers who later became friends. Someone suggested that he should put it into the menu. “It was just our recipe of Tom Yum soup,” he told us. “… and I just put the instant noodle in with the pork, raw egg yolk etc. Sometimes, some regulars called me and asked me if I could make it for them and I told them to come by at 11 pm after I finished my work.

After repeated requests for this favourite munchie dish, it made it to the late-night specials. Soon it gained so much popularity, Hia Gao decided to put it on the official late-night menu. “It was a disaster that day, the queue started at 9 pm. and they insisted that they would wait until 11 pm. to order it, which made it even more difficult for us to work and many other customers were upset.

“We got bad reviews on the internet. There were many complaints that Jeh Oh’s shouldn’t launch the menu if they couldn’t handle the situation.” Hia Gao reflected. Jeh Oh temporarily stopped selling the dish but after figuring out how to make their service efficient, they launched it again but this time they kept the announcement low key, which led to an easier service for the family, and ultimately happy customers. The name, “Mama Oh Ho” came from the sound his friends made when they witnessed the ginormous size of the dish.

“At first it was just word-of-mouth among our regular customers to their friends. When I started using social media networks, I didn’t understand it much but I slowly gained an understanding from our regular customers. They taught me how to use it and social media networks helped our business a lot.” Hia Gao explained. “I learned how to garnish my food to look Instagram-worthy and it has helped my food be noticed nation-wide.” The attention Jeh Oh’s received didn’t go unnoticed by inspectors either, as in 2019 the Michelin Guide Thailand bestowed the restaurant with a Michelin Bib Gourmand and again for the 2020 guide.

Jeh Oh’s popularity meant that it became the street food “must-visit” on foodies’ travelling list. The online reviews go on for days, not only to compliment the taste or take stunning pictures for social media but also to complain about how long the waits were, which naturally attracted those who sought their own business opportunities. Hia Gao told us “in Singapore and Malaysia, they have restaurants that made their own version of Mama Oh Ho” which appeared not to phase him, “I’m very happy that our dish is so famous it inspires other restaurants to create their own instant noodle dish.”

Since the Covid-19 pandemic broke out in Thailand, the government had announced restaurants were allowed to only operate as delivery or takeaway, which hit Jeh Oh’s Khao Tom Ped very hard. “Our family decided that we should temporarily close. Depending on delivery only is survivable but I don’t want to take the risk of infecting my parents if we open for delivery since they both already have health problems.”  Hia Gao continued “Even though we temporarily close, we have enough money to take care of our family which includes our staff”. However, since a week the Government began to relax their regulations and Jeh Oh’s may soon be able to reopen

But what does the future hold for his uber-famous family business? Hia Gao concluded “We don’t have the plan to expand and open another branch or franchise of Jay Oh’s, although there are Singaporean businessmen and Malaysian businessmen who contacted us and sent us contracts for us to put into consideration but we don’t think we are ready for that huge step. We are happy at where we are now, but in the far distant future, who knows?!”

Want to get noticed?!

Get in touch with the Foodies Marketing Specialist.

Promote or Advertise with us: contact@foodiesofficialasia.com
Join our community: BangkokFoodies OFFICIAL