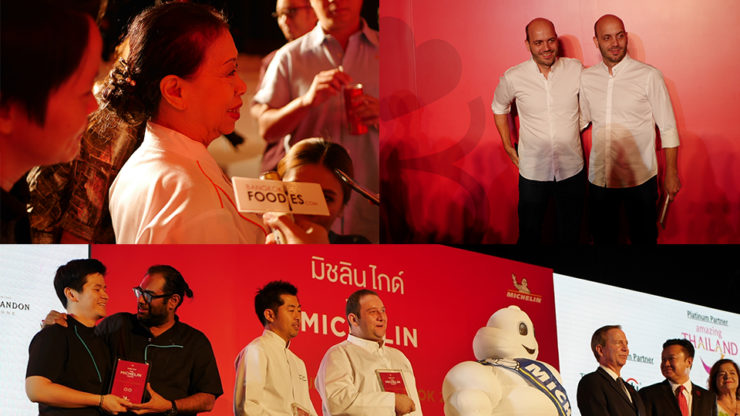 The Chefs, The Guide, The Gossip – Michelin Bangkok [ Opinion ]

The Chefs, The Guide, The Gossip – Michelin Bangkok [ Opinion ]

Walking into the quaint sized room which divides the Ballroom and the entrance of the Grand Hyatt Erawan, you could spot Chefs of esteemed restaurants standing alongside their posse looking deceptively nonplussed and other solo Chefs, anxiously drinking endless bottles of (unbranded) water. It took me some time to figure out that all these invitees were actually on the list, and that some were highly expectant of more stars than others. My suspicions were also confirmed by the apparent void of Chef absentees I searched for with futility.

To say there were high expectations coming from this absolute and conclusive list, from foodies and most notably, from industry persons is an understatement. For Bangkok Foodies, it was the hottest topic on our social networks and the most viewed blog to date. Admirable to the lead-up, Michelin stayed true to perpetuating their “cloak-and-dagger” stature. Chef and restaurateur friends were impulsive, jittery and on high alert…well, let’s just say, more than usual. There were abrupt menu changes, newly invented specials, and the safe bets Chefs who wouldn’t dare move a sprig of garnish. There were also chefs, infrequently at their locations becoming permanent fixtures again. Some were aware of a visit and others unsure, either way, nobody had any guarantee before they got “the call”.

Predictably, the Michelin Bangkok campaign created a palpable buzz among Chefs, restaurateurs, food bloggers and was content gold for food writers. I was a little confused with some of the communications, as a PR person, I felt there was some disconnection with marketing and strategy, as though there were too many hands on the project with different styles and conflicting messages. It came together in the end and the ceremony was smooth and well orchestrated. I heard a few unflattering comments regarding the MC’s performance and the small blunder the International Director of Michelin Guide made about Mezzaluna being an Italian instead of a French restaurant, but if that’s the most people can pick-apart then it only proves how little there was to fault.

The Michelin star winners – at large – were no surprise. Mostly considered well deserved, such as Paste, Suhring and Le Normandie.  What was genuinely appreciable was the acknowledgement of Elements at Okura Prestige and Upstairs Mikkeller, which I always found to be excellent but perpetually under the radar. Most controversial of all was Jay Fai. Handing down a Michelin star (rather than a Bib Gourmand) is apparently, a classic publicity move for Michelin in Asian countries. Chef Anand Gaggan (a famous nonconformist) was surprised there weren’t more in fact, as he said to Bangkok Foodies, “if a dim sum or seafood restaurant in Hong Kong can have a star why not Thailand? We are better than them”. Purists have argued that Michelin is losing its touch on it’s traditional values and grueling standards. One local veteran Chef said to me, “If street food can get a star then my Mamma can get a star”.

A double-edged sword, seeing as many of us agree but also believe, putting street food on a pedestal will help keep it thriving, particularly with its precarious state in Bangkok. I just hope Jay Fai can handle the demand and pressure at her delicate age. An anonymous restaurateur said to me on the day of her accolade, it was to be “her curse”, and only a week later, it was famously reported that she wished to return the Michelin star, although it has been rebutted by Jay Fai herself since.

Most disappointing omission for many of us was Le Du. This seemed like a direct snub, but also a reason for Chef Ton and team to reach for that elusive star in 2018 to which will add to more excitement and anticipation for him and those who teetered so dangerously close. It seemed there was only a handful up on the Michelin star stage which was scoffed at, having industry folks and foodies questioning whether the inspectors had a truly refined taste.  There was also a lot of speculation about why there were no Italian restaurants awarded stars and rather sticking to the predictability of French fare. It also made those wonder about Asia’s 50 & World’s 50 Best, famously associated with San Pellegrino ( Italian sparkling water ), had anything to do with that or those who may be closely associated.

For the guide, I’ve only perused the paperback, and to me, it seems like a relatively concise, clear and well-put together. Still waiting for that holiday opportune to arise where I can pull it apart with a fine tooth fork. I did hear a few complaints from Thai journalists and bloggers that the book felt rather light concerning content. That the copy was somewhat bland, some information and images were out-of-date and recommendations for many hotels were simply kudos for sponsors. Others responded to that by saying, it will only get better the longer it gets used to operating here, and taking care of partners is simply the nature of the beast.

Whichever way, it’s the ‘Michelin Guide’, set with the highest standards to follow yet subject to limitations relative to the countries its decided to infiltrate. Thailand is not the easiest country to navigate, with its many “idiosyncrasies” in business relationship. Michelin may find itself working within limited skills sets and resources of a country ready for Michelin but not entirely prepared for it. Thailand might be new to all this Michelin jazz, but there is massive potential in the market which is evident by all the attention it has already garnered. It’s popularity will only be greater if they continue to move swiftly and effectively, with the danger that attention spans may wane or easily be diverted. Foodies seem to be eager for Michelin to begin moving beyond Bangkok and exploring the depths of dirt track sois in Thailand’s many provinces. Michelin’s key message is to explore the unknown and foodies are notoriously insatiable for this.

As long as the guide is bringing more love and contribution to Thailand, its people, the culture and the economy, shouldn’t we be happy to support it? Even with Asia’s 50 Best. It’s about time Thailand is being “fought” over on the culinary world stage, and competition only breeds demand for excellence. The biggest challenge I see – as everything else in Thailand – is remaining as authentic and unbiased as possible.