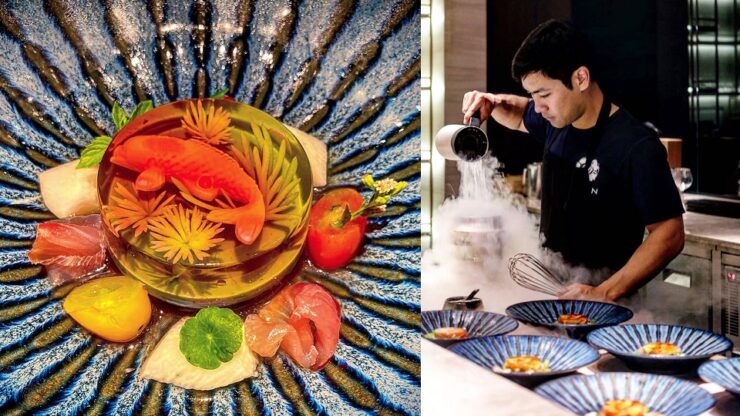 Natakorn “Thumb” Changkreaw, a former-bartender/ a YouTuber/ a real estate development company owner/ a restaurateur, tells Bangkok Foodies, “Imagine, a kid who sat all by himself indulging with books with pictures of fish, full of their information. Imagine that kid was me. I didn’t expect that one day my passion would be involved in (one of ) my career (s).”

Charming yet humble, Thumb is considered a heartthrob among his loyal youtube followers and bar-industry fans. Thumb really came onto the scene of food and beverage when he won Diageo World Class’ Southeast Asian Best Bloody Mary. One of his key ingredients for his interpretation for the Bloody Mary round is ‘Dashi’ (出汁).

Being crowned the best Bloody Mary isn’t his only award. In 2019, he and his mixologist friend, Pongpak “Ton” Sudthipongse from Sorrento, joined forces and competed in Glenfiddich’s World’s Most Experimental Bartender and became global winners.

Thumb was also the previous owner to defunct Perfume Fragrance Bar & Aromatic Cuisine before running his family’s real estate empire, Nitchada Thani in Pak Kret, Bangkok in late 2015. However, that doesn’t stop him from working with tastes. After adjusting his life with his position in his family’s business, Thumb opened Vapor which is currently operating inside Nichada Thani, where foodies enjoy quality seafood and views.

Hidden inside Vapor, Kaijin which means “God of the sea” in Japanese, is another fish-driven restaurant Thumb opened. But here is a twist, Kaijin is actually a Thai omakase restaurant and regardless of its food genre, its sophistication comes from its clean-lined decor which reflects the Zen philosophy, with their iconic large window, customers may enjoy the view of the centre lake whilst indulging on their fresh omakase bites. This place may only receive 10 diners per sitting. Bangkok foodies recommend anyone wanting to try, book with several weeks notice in advance.

Although not a new concept, the omakase restaurant has been operating since 2017 and is famed among the in-the-know, however, the omakase come-back of late means more locals are willing to discover the exotic meals they are missing from distant shores. What Thumb has created here, is the perfect (sustainable) compromise.

There are a couple of things that make Kaijin unique. While other restaurants use imported fish from Japan, Thumb chose a different path. Not just a rough-looking, pungent-smelling fish to be bought roadside with a bag of sticky rice and accompanied with spicy Thai salads. Thumb wholeheartedly believed and invested his restaurant career into local fish varieties.

Thumb explains,“When it comes to local products or in this case ingredients, Thai people often take it for granted or frown upon it.” Thumb continues, “I think it’s a sad thing that Thai people underrate local ingredients when actually there are plenty of quality local ingredients. Everything grows here so Thailand is lush and fecund. I think it’s my job to educate people to learn to appreciate what our land and sea have to offer.”

Thumb doesn’t buy his fishes from fish markets like other restaurant but he jumps on a boat and goes out in the open water or freshwater to catch his fishes himself with his celebrity friend, DJ Poom, and they video their trip for his show called ‘Khon Long Rod’ [คนหลงรส] on Youtube. His menu always changes because it depends on the catches of the day.

One of his courses is sashimi contained with 3 different types of Thai fish; Thai Tachiuo from Phuket, Rainbow Runner from Surat Thani and Bigeye Trevally from Phuket. Normally, Thai people wouldn’t consider eating them raw but with Ikejime, a Japanese technique that helps maintain the quality of the fish meat, these fishes are ideal and safe for eating raw. Another course is an Aburi sushi of a Goliath Grouper which was sprayed with single malt before dry-aged. This sushi is unexpectedly sweet and juicy.

And who would have thought that Thai catfish could make good sushi?! Catfish is one of the most gamy fish known to the human palate but with the knowledge that Thumb and his team have acquired working with local Thai fish, the menu Namazu Aburi Sushi is one to be reckoned with. It tastes very similar to the Japanese unagi for its robust and rich flavours.

Thumb and his team have managed to do something which has never been developed before, creating high quality local Thai fish into fresh and delicate Omakase bites, further proof that foodies can take, using Thai fish in raw food applications, more seriously. Not only are the fish local but also many of the fruits and vegetables that are used in his dishes are local too and some of them are from Thumb’s very own garden.

Other than loving local ingredients, he also enforces zero waste practice. As a matter of fact, his award-winning Bloody Mary reflects the practice of this. The practice is the principle of his restaurants and way of life. The Dashi in his cocktail is different from Japanese original recipe because he applies fishbones and fins, a leftover from the kitchen, in his Dashi. So nothing goes to waste.

The dishes that reflect his zero-waste practice are in some of his courses. One of them is the first course of the meal, Santoryu, which has three parts. The first part is Pseudo Shark Fin which is made of the gill of Giant Grouper, not of shark. This one got him and Ton the title of Glenfiddich Global Champions. The second part is Katsuzui Truffle, made of fishbone marrow and black truffle. The last part is Java Barb. This one comes with fried tiny common barb stuffed with fish fat and seasoned with Tom Yum spices, dangling at the end of the edible fishing rod. The tiny cup under the fish is an aperitif made of Junmai sake mixed with butterfly pea syrup infused with organic jasmine and Khao Mak [ข้าวหมาก: Thai fermented alcoholic rice].

Coming to Kaijin provides an unorthodox experience for what we typically know of Omakase, but Thumb continues to work with Thai fish in a way that everything balances. Although Thumb may not appear very often in the restaurants as he’s either going out fishing or running his family’s real estate business, he has trained his team to follow in his footsteps, providing Thais and residents with an extraordinarily unique Thai omakase restaurant experience.

Author: Wariya.I
Wariya has a strong passion for cocktails,
and you may have met her several times
but she likes to keep it casual and low-profile.
She also enjoys quality tea, especially
Japanese green tea