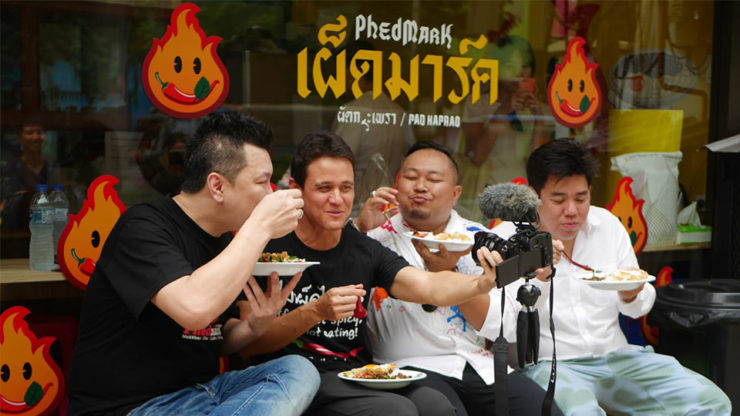 By BangkokFoodies  •  2 years ago  •  What's News, Meet The Foodies

Bangkok Foodies’ve all heard the world-famous Mark Wiens, an American-Chinese who has settled down in Thailand for many years and runs his own food vlog with 5.61 million subscribers on Youtube, sampling exotic dishes around the world or expressing his adoration for spicy food in Thailand.

Mark, since September 2019, has turned himself into a restaurateur with has his first Phad Kaprao (spicy stir-fry basil) restaurant called “Phed Mark” [เผ็ดมาร์ค], a pun for “เผ็ดมาก” [Phed Maak] which means “very spicy” in Thai. Mark Wiens Fans and Phad Kaprao lovers can find the tiny eatery in front of the Ekkamai Bus Station, easily spotted from the road with its bright yellow frontage and enormous flame logo looming over the site.

Soon after they opened their doors, orders came in hard and fast. We were informed that most orders are to be made in advance to avoid lengthy waits. So what makes the foodies flock to Phed Mark, besides from getting a peek at the foodie superstars? Well, besides serving only Pad Kaprao as a rice set, the second element is the use of duck egg which yolk has that extra, richness and creaminess.

Avid Phad Kaprao fans also know the meal can’t be complete without a fried egg and a duck egg teetering on top makes Phed Mark’s Pad Kaprao that much more appealing. Last but not least is the adding green pepper which Mark explains, “Along with the chilli heat, it also offers the pepper heat, the pepper heat is more a slow warmth, it creeps up on you, it’s spicy, it’s a good level, that’s the way we like to eat”!

Though clearly a big fan of spice, further indicated by Mark’s t-shirt slogan, “ไม่เผ็ดไม่กิน” [If it’s not spicy, I’m not eating it!], Bangkok Foodies , Bangkok Foodies went to visit Mark at his eatery, to try to understand what inspired him to open a Pad Kaprao shop in Bangkok, and why spice is such an integral element to this ubiquitous Thai dish.

Bangkok Foodies: Why are Thai’s so obsessed with Phad Kaprao in Thailand do you think?

Mark Wiens: It has a comforting element to it, if you don’t know what to eat that’s what you eat, it has a well-rounded flavour, it’s herbaceous, spicy it’s garlicky, you have the meat and you usually have a fried egg with it. That’s just perfect on a plate of rice, it’s delicious, it’s wonderful, it’s fast.

Bangkok Foodies: How is your Phad Kaprao different?

Mark Wiens: We use duck eggs, for extra creaminess, it’s not necessarily original, it’s just the way we like it the best, there are so many different variations, nobody is wrong,… some people add their things some people don’t, some people add long beans. We like it pure meat, lots of herbs, also dry-style. This our favourite version, it is what we serve.

Bangkok Foodies: Do you know anything about the history of pad Krapo?

Bangkok Foodies: How long did it take to perfect the recipe?

Mark Wiens: It was an ongoing process, months and months

Bangkok Foodies: Damn! Why didn’t you call us for that?

Mark Wiens: *laughs’ ‘ yes actually it was years of tasting, although I didn’t know there was a restaurant in the future, but taste testing, trying different ratios, different combinations, we did a lot of late-night eating with Chef Kik cooking lots of Phad Kaprao, testing and trying again. It was a lot of fun.

Bangkok Foodies: How did this concept come about?

Mark Wiens: It was a collective between the four of us, me and “Tan, (famously known as “Itan” a self-proclaimed “Bangkok Eating Specialist”) and I were speaking about Pad Kaprao and where is the best place to eat it. My favourite place is at home where my mother-in-law can make it how I want it: spicy, flavourful and lots of basil so I like to eat it at home. But it’s good everywhere, but we’re like – how can we make a really good version? After that talk, Chef Gigg and Tep joined our project.

Bangkok Foodies: Is there any more plans for future expansion or a menu expansion?

Mark Wiens: Not sure about menu expansion but restaurant expansion, but not sure as we want to keep specifically about the Phad Kaprao dish.

Bangkok Foodies: How many chilis do “you” have in your Phad Kaprao

Mark Wiens: There are four different types of chilis, but probably like a good handful, when they are pounded up a good spoonful. So, ten to fifteen of the smaller chillies.

Bangkok Foodies: Do you offer different levels of spice?

Mark Wiens: There are three levels of spice, the medium is the signature, then there is a less spicy version, but to make Phad Kaprao you need chilis because of the flavours… it’s totally fine if people can’t eat chilis but you really do need Phad Kaprao to be chilli. Lastly, we have a very spicy version.

Bangkok Foodies did have the pleasure to try the medium spiced which was more than substantial on the spicy-front but then again, heat level is such a personal thing. We can also say, although this place may not be the “best” Phad Kaprao in town, as it would be impossible to compare the thousands of styles served up in varying establishments let alone judge based on personal preference, but we do believe Phed Mark offers special elements and flavour profiles to their star-studded recipe, with or without the hype.

Author: Wariya I.
Wariya has a strong passion for cocktails, and you may have met her several times but she likes to keep it casual and low-profile. She also likes to enjoy