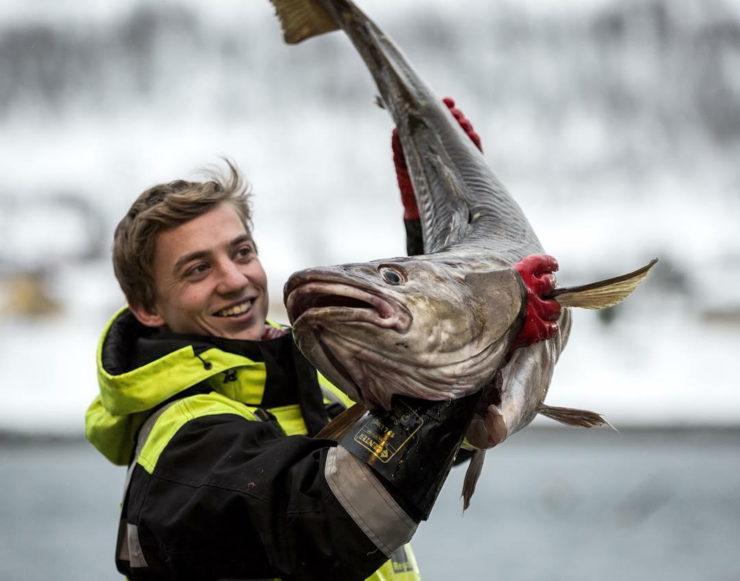 The Norwegian seafood trend is on the rise internationally. Last year (2017), the Norwegian Seafood Council reported a record number of exports at $11.7 billion worth, with growing exports to Asia and the U.S.

But how much do we know about Norwegian seafood? Other than the popular, brightly coloured, stripey Norwegian Salmon which you can find dominating Izakaya restaurant menus in Bangkok? The Norwegian Turbot, for instance, is a highly prized white fish with eyes only on its left side, or that wild Norwegian Great Scallops are the biggest in the world and have a delightfully sweet taste, or that the Norwegian Skrei Cod comes from old Norse word meaning “wanderer”, also known as “Norwegian Miracle” because its annual arrival enabled people to inhabit the far north of Norway.

A post shared by Norwegian Seafood Council (@norwegianseafoodcouncil) on Sep 18, 2017 at 11:42am PDT

On Wednesday 18th April 2018, The Dock Thonglor in collaboration with and The Norwegian Seafood Council will hold their very first four hands dinner highlighting Norway’s wild and farmed cold-water seafood. Bangkok Foodies took the opportunity to interview Jon Erik Steenslid, the Regional Director of The Norwegian Seafood Council in South East Asia, a half Japanese, half Norwegian self-professed foodie who grew up in a Norwegian fishing town where his father was a sailor.

BKF: Could you please tell us in a few words, what is the “The Norwegian Seafood Council”?

NSC is an international generic marketing organisation for Norwegian seafood, established in 1991 and owned by the Ministry of Trade and Fisheries. We are financed through a mandatory export duty, and have 13 international offices around the world.

A post shared by Norwegian Seafood Council (@norwegianseafoodcouncil) on Jun 10, 2015 at 5:43am PDT

A post shared by Restaurant Spetters (@restaurantspetters) on Jan 3, 2018 at 4:07am PST

BKF: Why do you think the demand for Norwegian Seafood is growing internationally?

Consumers are becoming more aware of eating healthy and balanced, and are demanding high-quality seafood that is sustainable, safe, traceable and delicious. Norwegian seafood ticks all the boxes.

BKF: What is the most common misconception(s) about Norwegian seafood?

Most misconceptions are connected to farmed salmon, saying it is a bad product that is not good for your health for different reasons. Much of this is based on untrue stories and “fake news”. In fact farmed salmon is just as healthy as wild, sometimes even better, which we try to educate consumers.

BKF: How does Norway’s cold water conditions and other factors make it an ideal location for breeding quality fish?

Norway has a very long open and sheltered coastline with cold, clear waters, a combination ideal for both farmed and wild fish. A combination of warmer waters carried north by the Gulf Stream meets cold waters streaming from the Arctic, giving perfect temperature and natural conditions for many different types of seafood. The Norwegians have lived by and from the sea for thousands of years and was the pioneers in developing aquaculture for salmon, making us the largest producer of farmed salmon in the world.

A post shared by Norwegian Seafood Council (@norwegianseafoodcouncil) on May 4, 2017 at 5:09am PDT

BKF: With so much fish being consumed, what are some of the measures taken place for sustainability?

Norway has what is considered by many as the world’s strictest management system for seafood with sustainability as its core value. For wild fish, all major stocks are sustainably managed and certified through extensive research and fishing quotas. Norwegian aquaculture is strictly regulated through licenses and national standards to ensure minimum impact on nature, and all feed ingredients are from safe and sustainable sources.

A post shared by Norwegian Seafood Council (@norwegianseafoodcouncil) on Jan 28, 2015 at 4:31am PST

BKF: Could you tell us a bit more about wild Norwegian seafood, such as the Turbot, Scallop and Atlantic Skrei?

Due to cold waters wild seafood grow slowly and develop unique texture and taste. Turbot and scallops are good examples of this, being highly sought after and quite exclusive as catching is very limited. The Atlantic Cod is a very traditional and important fish for Norway. We can trace trade and export of cod all the way back to the Vikings some 1,000 years ago, and it has long been a vital food source for Norwegians. Norway has the world’s largest sustainably managed stock of Atlantic Cod. It has a lean and delectable firm white and flaky flesh with a mild flavour, suitable for many different types of preparation and tastes. It goes very well with different types of curry.

BKF: Could you tell us more about your farmed seafood, such as Norwegian Salmon and public concerns about health safety and regulations?

Norwegian salmon is farmed under very strict regulations and control to ensure sustainability, animal welfare and food safety. It is the most tested food product in Norway with over 12000 tests every year by independent laboratories, and the test results are public.

Unfortunately, we do hear negative stories about farmed seafood from time to time, and these are often generalised by consumers and taken out of context. A good example is a risk of getting infected by parasites when eating raw salmon in general. In the wild fish get infected by parasites from the prey they eat. Farmed Norwegian salmon is only given feed in which the ingredients have been heat-treated in such a way that no parasites can survive, and as such the salmon itself does not contain any parasites.

According to European food safety regulations, any seafood to be eaten raw has to be frozen first to kill any parasites. Norwegian farmed salmon is exempted from this regulation due to the controlled diet and thousands of tests done over many years to prove that it does not contain parasites. Norwegian salmon contains lower levels than wild salmon and other wild fish, making it one of the safest option for sushi and sashimi.

BKF: How do most Norwegians enjoy their seafood?

Norwegians prepare their seafood in many different ways, such as boiled, fried, oven baked, smoked and cured. In the summertime grilling or barbecuing is very popular, and a well prepared grilled salmon is a favourite among many. The traditional way of preparing salmon is boiled in water with salt, whole pepper and bay leaves, accompanied by boiled potatoes, pickled cucumber salad and a cream sauce or just simply sour cream.

A post shared by Norwegian Seafood Council (@norwegianseafoodcouncil) on Jun 6, 2015 at 7:51am PDT

BKF: How have you seen Norwegian seafood applied in innovative ways in other countries or restaurants?

Top quality Norwegian seafood can be found in many of the best restaurants around the world. High value and quality products such as king crab, scallops, halibut are sought after by the world’s best chefs.

Many Michelin star restaurants, among them, the legendary Danish restaurant Noma in Denmark, is using Norwegian seafood on their menu simply because they choose nothing but the best. The number of Michelin Star restaurants is also increasing in Norway, and for them the very best of Norwegian seafood is a key ingredient. One of the great advantages of  Norwegian seafood is that it is very versatile and can be used in many different types of cuisine, from advanced French dishes to mum’s comforting homemade favourites all around the world.

A post shared by Norwegian Seafood Council (@norwegianseafoodcouncil) on Apr 29, 2017 at 8:47am PDT 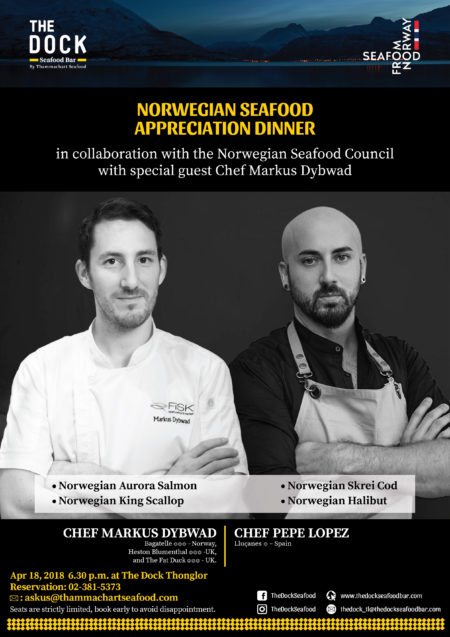 On the 18th of April 2018 from 6:30 pm, Thammachart Seafood, in collaboration with the Norwegian Seafood Council, will hold an exclusive five-course dinner, highlighting top quality Atlantic cold water seafood from Norway.

The event will be held at The Dock Seafood Bar by Thammachart Seafood in Thonglor (The Maze Thonglor) and will feature Norwegian Chef, Markus Dybwad, with several years experience from Michelin restaurants, such as the Bagatelle in Norway and the Fat Duck in Berkshire, UK.

This unique seafood menu will be a collaborate effort by both Chef Markus Dybwad and Chef Pepe Lopez, the Corporate Chef at Thammachart Seafood.