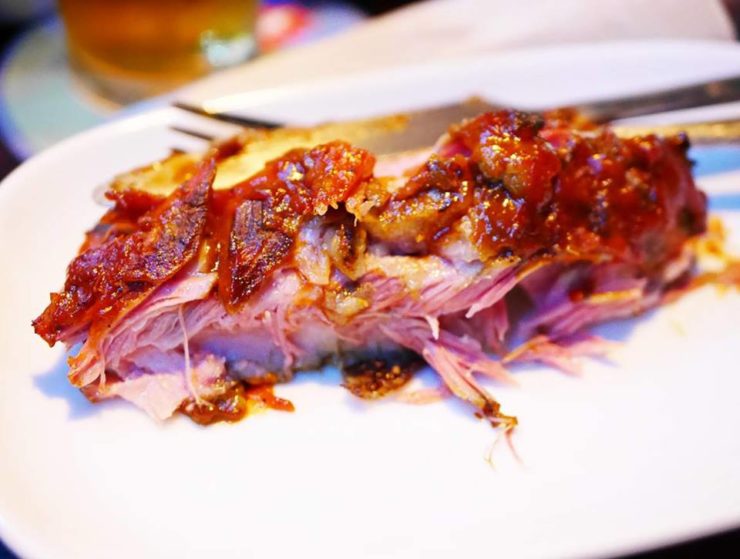 How Smokin’ Is the New Smokin’ Pug?

How Smokin’ Is the New Smokin’ Pug?

Many of you may remember we opened our website www.bangkokfoodies.com with the Scoop that Bangkok’s phenomenally popular rib joint were to move. It’s been over a month since they settled in their new home in Lang Suan road and after ironing out some of their opening kinks, we decided to pay a little visit.

Surprisingly the motorsi dudes knew exactly where to go which generally takes more than a few months for any new establishment. If catching a BTS you can walk from Phloen Chit or Chit Lom to the mouth (beginning) of the soi and in your best Tinglish (Thai-English accent), let them know you’re going to “Sa-mo-king! Pug”. In less than 30 seconds you will arrive at your destination.

You will first notice their facade which is a window that exposes diners in a dimly lit room, seated on metal chairs and surrounded with little decor, except for a plant, painting or small statue sporadically but purposefully placed, which overall makes for a warm, minimalist charm.

You need to pass through an outdoor hall to enter the restaurant which upon entering, is a narrow room with high stools and small tables along a window where the bar sits adjacent.

The bar is constructed with corrugated sheets, wood and other and raw material, highlighted under dim spotlighting. I was relieved to be seated here rather than in the main dining which felt a little colder and impersonal, plus foodies want to be where the action is (by the bar and between the kitchen). However, if there’s an entourage, they also provide upstairs dining.

The good thing about the rustic-cum-modern design of the new Smokin Pug is that it really gives a you a sense of space, not rubbing shoulders with others yet retains intimacy and warmth, not to mention this “country class” thing they’ve managed to achieve.

We sat down on the high stools which weren’t not the most comfortable yet still befitting and started immediately eating the complimentary sweet potato chips which were extremely crunchy and moreish.

We had to stop ourselves from devouring the whole bowl, although when the cream blue cheese dip came out, all signs of constraint were lost. Creamy but not fatty, the blue cheese flavour was smooth and sophisticated, simply impeccable. Don’t get me started on their potato salad, my guest literally quoted it as “the best Potato salad I’ve ever had” and he’s a Frenchman.

Now, I’m not a Rib mad person, it’s really not something I grew up with or have fond memories of. But the technique and flavour of this smoky beast, makes me closer to understanding America’s obsession with ribs and how eating them have become a social practice ingrained into family-style eating culture.

I guess that’s not so surprising when we discovered there was a Swiss man, manning the kitchen and smokers. He informed us that the potato salad had pieces of celery and other secret vegetation inside which I can’t recall – whatever – it was excellent.

We also got a backstage pass to their backyard where we were presented with two enormous Kamado Joe barbecues in signature fire-engine red along with a showing of their smoker oven.

The signature Baby Back Ribs take 12 hours to smoke overnight using Hickory Wood imported from the U.S, which is then lathered with their secret BBQ sauce. Suffice to say, you can taste the love that goes into making them.

Now, I’m not a Rib-mad person, it’s really not something I grew up with or have fond memories of. But the technique and flavour of this smoky beast, makes me closer to understanding America’s obsession with ribs and how eating them have become a social practice ingrained into family-style eating culture.

The meat literally begins to fall off the bone once you slice it, and when placed on the tongue that’s when the melting meaty magic happens. The Baby Back Ribs come with a side of Cornbread to which tasted just fine but not a fan of. It also came with a small pot of coleslaw, and this was something that really spoke to me

In Australia we love our coleslaw although it tends to be dripping in cheap, fatty and sour “mayonnaise” and leaves little to the imagination. In this case, The Smokin Pug’s coleslaw is highly refreshing and delicate, the crunch and flavour of fresh cabbage is felt as it should be.

To marry all this happy Barbeque goodness we washed it down with a glass of Little Creatures beer and my personal highlight of the night, Dana’s infamous Dirty Martini with Blue Cheese stuffed Olives! They’ve managed to master not only their meals but a handful of rustic cocktails too.

Sadly we were too stuffed to try their Key Lime Pie, whenever we see it on a menu it’s a must-order given a good one is so elusive in this city and is the one, true American dessert we can adamantly agree on trying. Oh well! More reason to return.

To sum up, Ribs and Beef Brisket etcetera is generally not the type of food I would eat on a regular basis – in fact I fell more in love with their sides – but when the occasion calls for it, I will return with carnivorous reinforcements and I suggest you should do the same.

It’s funny I had no intended to write a review, merely a follow up with pictures but I couldn’t stop reminiscing which led to more writing, and like many who have never tried, I always wondered what the fuss was about. Seeking fault which wasn’t there (a common character flaw among foodies).

But there’s no mistaking that their success truly comes from grit and hard work, a foresight in details and a knack for making the rather ordinary pretty darn extraordinary.