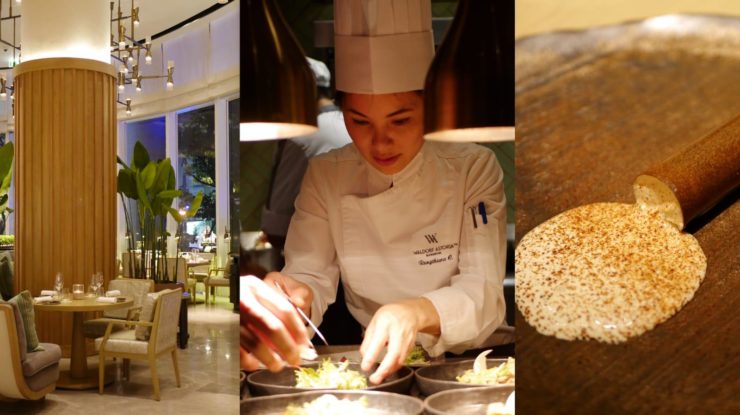 Anyone who grew up on a diet of classic Hollywood movies will recall The Waldorf Astoria in New York as the iconic backdrop for the uber wealthy and impossibly sophisticated. Think The Out of Towners, The Godfather III, Scent of a Woman, Coming to America (OMG! The sequel is coming), and Catch Me If You Can. Given that mystique, the opening of the Waldorf Astoria Bangkok was highly anticipated, by the hospitality industry and of course by curious foodies. Remember that the New York hotel was the birthplace of the Waldorf salad *drops Fawlty Towers scene reference here*, once the height of elegant dining. So there’s bound to be some ridiculously high expectations.

Fast forward seven months after the opening of the Waldorf Astoria Bangkok. The Front Room Restaurant at the Waldorf Astoria Bangkok has survived the hype; in fact, it seems to have surpassed it. Naturally, BangkokFoodies.com had to check out the handiwork of Chef Fae, Head Chef of the Front Room for ourselves. Was it all that reports said it was on the various media platforms?

The name of the restaurant couldn’t be more obvious, an open-spaced room positioned directly at the front of the Waldorf Astoria, with lofty ceiling, low cushioned chairs and sofa banquette seating and appropriately Nordic light wood furnishings. The outstanding light fixture rods overhead jut out in dramatic angles as the room’s centerpiece against a muted blue, grey and copper-gold designed theme.

I must say, there’s something lobby-esque about this place and that’s not to sound disparaging. It’s reminiscent of grandiose entrance halls, but in the case of Front Room the design is minimalistic refinement with maximum comfort, which surprisingly manages to create a more congenial, welcoming atmosphere. Still one would imagine this as a place to coverage for an early executive dinner or a meal with some pomp and circumstance but definitely not for a secret tryst or a rowdy wine-binge.

Most pleasing for the senses is the natural light that streams in by the window-wrapped facade and the other advantageous sensory feature that excites the sight, hearing and smell of any foodie: the open kitchen. It’s also here you may first witness the petite chef, sporting a meticulously pressed white jacket, and her striking eyes that peek out from under the high chef’s toque as she moves about her kitchen with an effortless grace and steely precision.

A welcome affirmation on the menu states in print: “We use locally sourced Thai ingredients combined with Nordic cooking techniques”. We tried the seven-course set menu, which begins with the Velkommen, a selection 5 amuse-bouche, with the batter-heavy Danish Pancake Puffs (Aebleskiver), my least favourite and the Razor Clam, with flavours faintly reminiscent of Tom Kha (lemongrass soup), at the forefront.

The showstopper was Raised in Korat, a cigar-shaped prepared by rolling cauliflower and squid-ink into a thin cylindrical crisp, sprinkled with saffron and black garlic and filled with Thai beef striploin tartare spiced with North Eastern Thai flavours and served with cold smoked egg yolk and apple sauce. The finely diced Thai beef is wonderfully tender and surprisingly delicate, the creaminess and fattiness of the dressing compliments the sticky bite of the cigar shell, and the pickled papaya and spices adds a pop of acidity. This dish should be named a “Dream in Korat”.

The Atlantic Laks Salmon, Carrot, Bitter Oranges and the Rice Mayo Reborn Egg Yolk, Mussel Sauce, Eggshells were not without their merits. Spot-on technique, beautiful plating and more-than-pleasing to the palate, but I was less inclined to recall them, given they felt more Nordic than Nordic – Thai.

But it’s when To the Sea — Toothfish, Clam, Smoked Sauce — arrives at our table delivered by Chef Fae herself that we felt the warmth of her heart envelope the table. As she poured the sauce over the dish, her demeanour softened, her smile-widened and eyes sparkled as she talked of the fond memories of her summer holidays by the sea, in Denmark. Bar none, this was the best show of Nordic-influenced technique that showcased a multitude of seafood and preparation methods that I’ve experienced so far.

Besides the toothfish and clam, the dish is garnished with razor clam, fish powder and scallops and is dressed with prawn crackers and crispy fish skins. Dare I say the the combination of fishy flavours a little on the “funky” side, but it’s the intelligent balance that binds this entire medley together, makes for a truly emotive seaside experience.

Chef Fae’s flair for Thai innovation offset by her Nordic technical skills is what sets her apart from an industry which is fast becoming saturated with young and hungry ambitious chefs. Despite the competition in this volatile industry particularly for women chefs who are still finding their place, she is quickly making her own mark on the cluttered city map.

The only small risk I see for this modern menu would be failing to find that sweet spot between West and Far East, between Thai and Nordic. If Chef Fae can strike a delicate balance that defines her unique personality, the world will be her chili-flecked oyster.