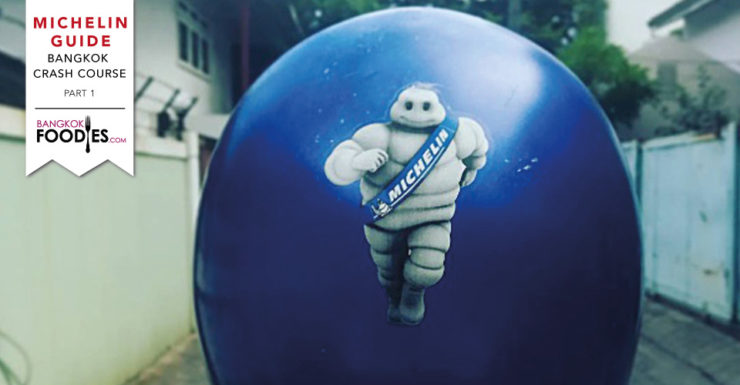 If you haven’t already heard  Michelin is in town, you’ve either fallen deep into a Mexican food or Burger coma, or you’re not much of a foodie or at least a so-called one.

Whether you believe the world’s most famous star rating system for restaurants is a good or bad thing for Thailand, wont change a thing. Millions of baht have gone into various pockets to make it happen and they ain’t going anywhere. So lets make the most of it shall we?

And really it’s no surprise they finally made it here. The quality and diversity of fine-dining restaurants and eateries have soared over the last 5 years, but not much the same can be said about our vanishing street food (but let’s save that battle for another article).

Question is how much do foodies and the dining public really know about Michelin apart from stars, old French chefs and a little red book?

Bangkok Foodies decided to compile a crash course for dummies. A three part guide to Michelin, with need-to-know and fun factoids, so that when the scrum for the first edition arrives, you can feel safe in knowledge that you actually learned some stuff, and be bad-ass (or just an ass) about it.

Starting with Michelin’s most famous icon, the “Michelin Man”, officially known as “Bibendum” (in French), the Michelin Tyre company’s mascot, which is basically a figure made up of tires, and not marshmallows.

The mistaken identity is actually a common one, since the cute yet menacing giant “Mr Puft” appeared in the Ghostbuster 1984 movie, so much that the resemblance gets a mention in Wikipedia. 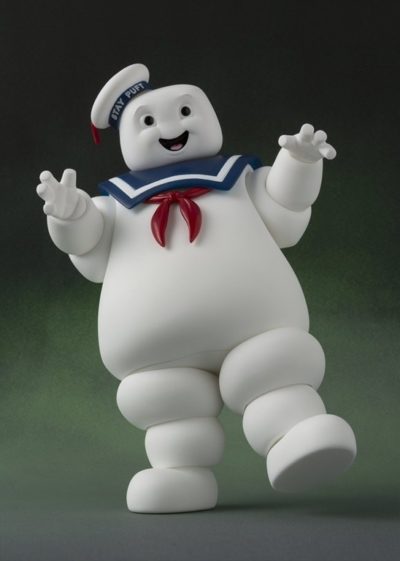 In 1894, the founding brothers, Édouard and André Michelin,  were inspired by a pile of tyres stacked up at a University Exposition in Lyon (or in their factory according to varying websites), which gave the impression of a large robust man without arms. 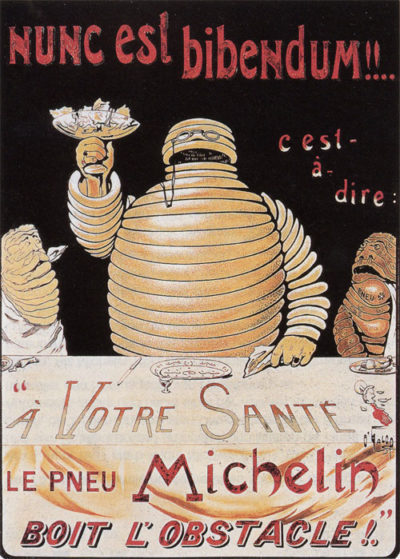 An artist O’Galop was commissioned by the brothers to create the Bibendum image from a rejected poster he designed in 1898 for a brasserie, depicting a bearded giant character, made from tires and raising a glass filled with nails and broken glass.

The Latin quote on the poster read “Nunc est Bibendum” (now it’s time to drink). The slogan was later launched by André to represent the indestructibility of Michelin tires. 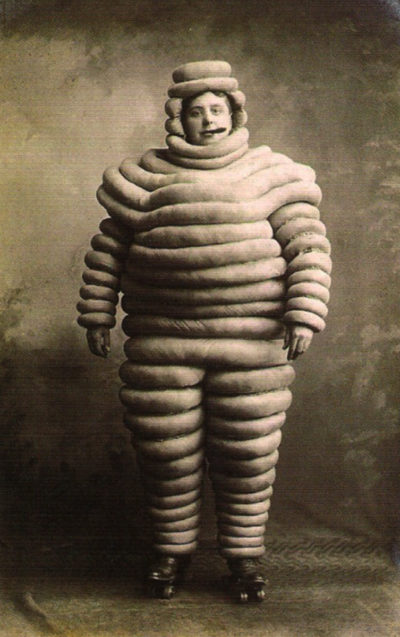 There was a publication from 1907 to 1915, by the Agenzia dei Italia Pneumatici Michelin who sent their monthly reviews by post to their customers. Their covers were bright and colourful illustrations and would often grace the Michelin Man himself.

The Italians did an impressive job in “gentrifying” the Michelin character. One which wore shiny black heeled shoes, an Italian sash and top hats. In this case, as an aristocratic, with women fawning around him on the chandelier-lit dancefloor. This is further proof of the universal knowledge, that the Italians have always been this darn cool. 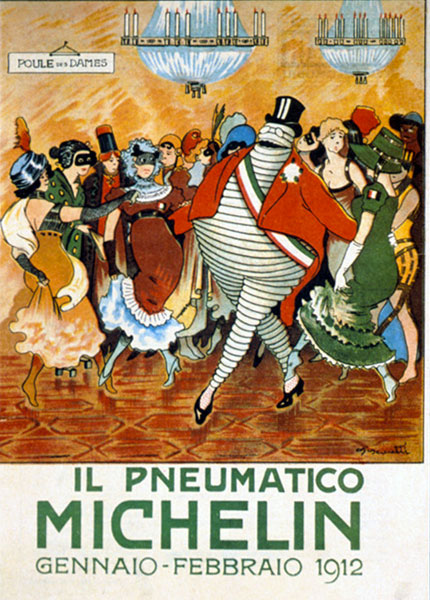 The mascot creation was sorted but how did the book guide come about?

Well, the founding brothers of Michelin—Édouard and André Michelin— published a free driver guide in 1900 with information on service stations, mechanics, restaurants, and hotels. The goal was to encourage driving in France, thereby increasing demand for new tires as the old ones got worn out. 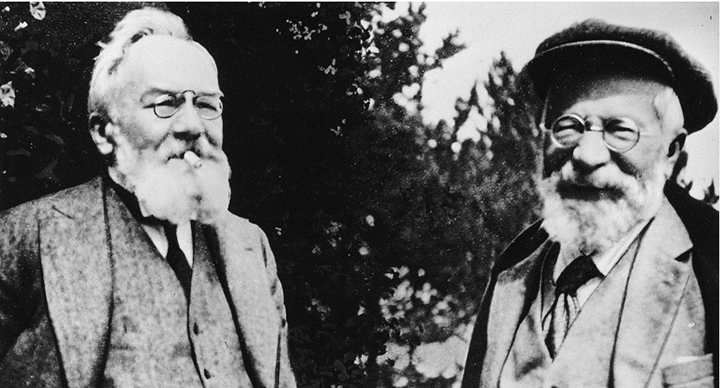 After André allegedly noticed the guide being used to prop up a workbench (God forbid) in a mechanic shop, they began to charge for the guide in 1922 under the idea that a “man only truly respects what he pays for.” 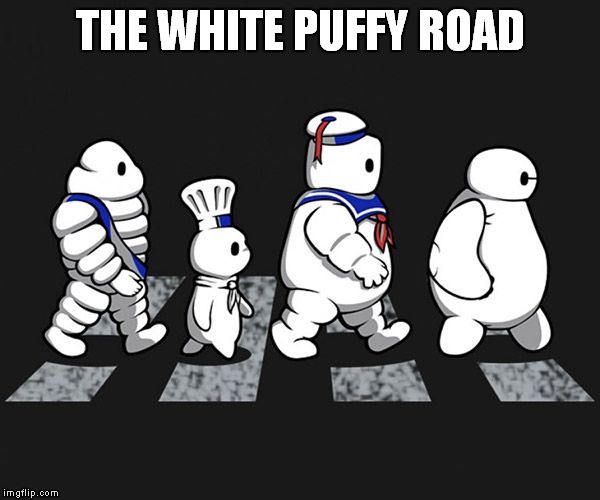 They also noticed that the restaurant section had become very popular, so they recruited inspectors to review more restaurants and in 1926, the guide began to award stars for fine dining
establishments.

Initially, there was only a single star awarded.Then, in 1931, the hierarchy of zero, one, two, and three stars was introduced. Finally, in 1936, the criteria for the starred rankings were published

The guide got its present red color in 1913, earlier is was blue. 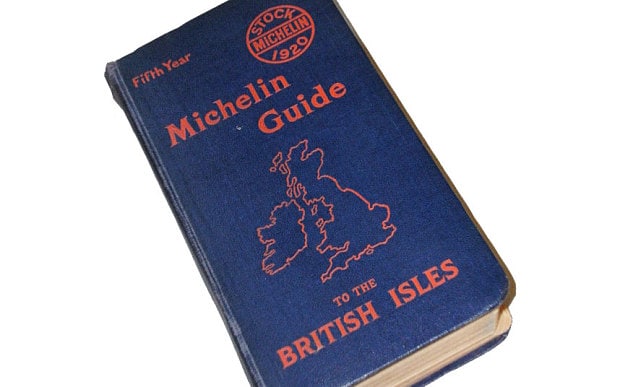 The Guide also highlights restaurant with “good food at moderate prices”, under Bid Gourmand status since 1995, named after their mascot.

In Japan 2007, Tokyo was controversially awarded more stars, 150 restaurants more than than Paris. It was believed by many as a  business decision in order to appease the Japanese public to further penetrate the Japanese market.

2 stars – excellent, worth a detour

3 stars – exceptional, worth a special journey

Inspectors judge by 5 criteria : Ingredients, Technique, Personality of the chef in the cuisine, Value and Consistency. 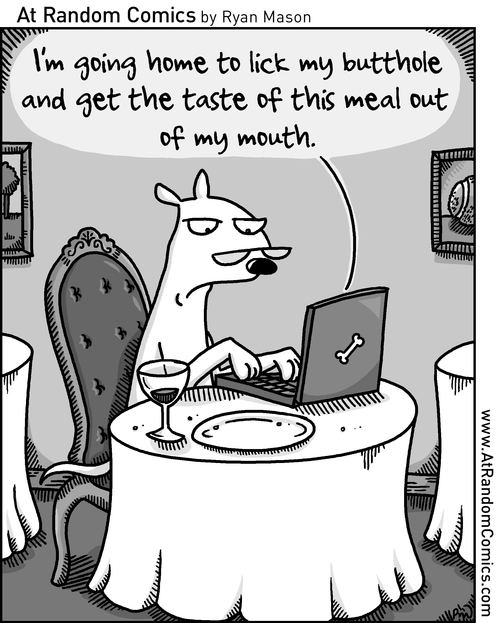 It’s all about what’s on the plate. Stars are awarded to establishments and not chefs themselves. So a “Michelin-starred chef” doesn’t actually exist.

Restaurants can receive a separate rating on ambiance and service, represented in a fork and spoon which cross over.

These indicators are know as “Covers”. One spoon and fork icon represent :quite comfortable” and 5 being the maximum, is “Luxury in the Traditional Style”. 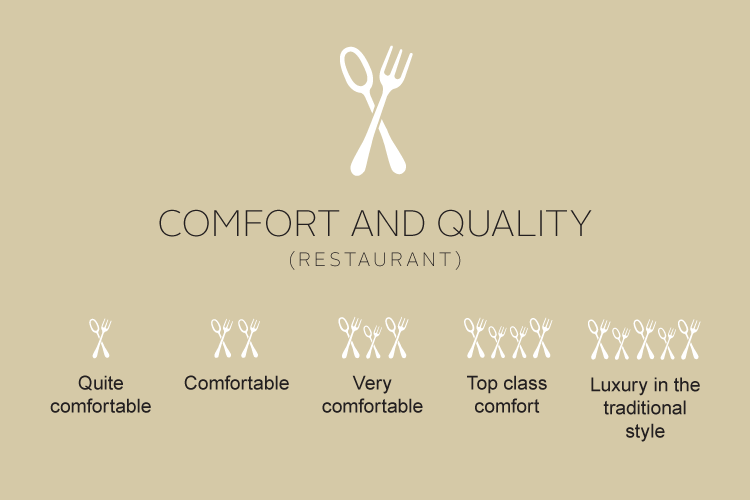 Thank you, and see you for part Deux! …