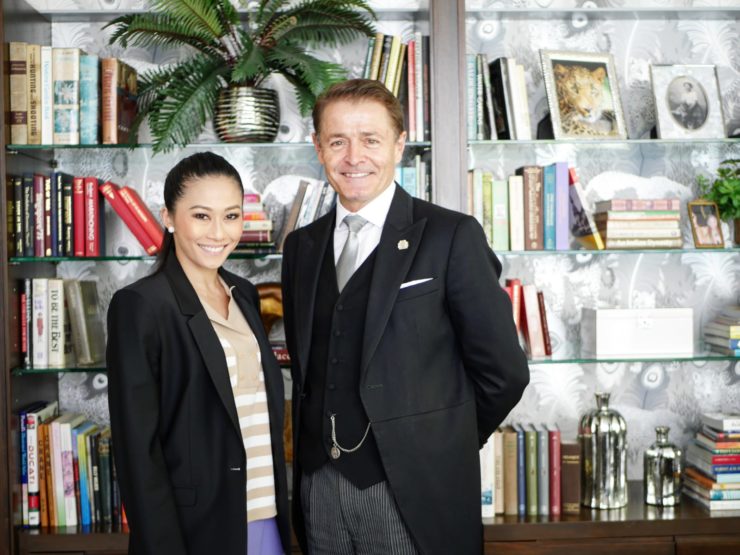 Bangkok Gets Its Own Butler Academy – Nai Lert Butler

Bangkok Gets Its Own Butler Academy – Nai Lert Butler

Unless you actually grew up in a stately home, visions of butlers probably entered your life through televisions screens, appearing alongside a crazy nanny from Flushing Queens on The Nanny or serving fake Piña Coladas to sexually frustrated couples on the Love Boat. There was even Lurch, The Addams Family’s own faithful Frankenstein in the 60s who played piano, but rarely did any average folk witness all their tailcoat tuxedo glory in person.

Butlers tend to be portrayed as stoic creatures with well-disguised affection for their “masters”, but it was always that level of service and loyalty that truly fascinated a foodie.  An old-world charm of white gloves, obsessively polished glasses, silverware that came out of velvet lined boxes and guests that abided by a code of etiquette all in an era where providing personal service was considered less lowly but rather a pinnacle role to a lifetime career in the service industry.

So the question is; do they still exist today? Well, it turns out the traditional butlers are still very much in action, and the industry has evolved. Many butlers have discarded their signature stiffly tailored suits and adapting to the modern environment with a more youthful clientele to serve.

Now you can find Principle Butler trainers and Butlers-to-be right here in Bangkok at the Nai Lert Butler Academy. Nai Lert Butler is Bangkok’s only academy for butler training in Thailand. A dream project of Naphaporn Bodiratnangkura (Lek), a third generation Nai Lert Group family descendant and the sole brainchild to this exclusive school.  Bangkok Foodies took the opportunity to talk with K. Lek about her love for the service, and her inspiration behind the The Nai Lert Butler academy.

BKF: What made you think of opening a Butler Academy here in Thailand?

BKF: What sort of clients or business do you see in Thailand as requiring a butler service or is is it intended for those to work offshore?

BKF: When was your first encounter with a Butler and what were your impressions?

Lek: I went to the Ritz Hotel in London at the age of 16. I loved how they looked, how they stood, and the experience I got after that dinner.

BKF: What do you see Thailand has as an advantage and disadvantage in the current F&B service industry?

BKF: Do you strongly believe learning proper etiquette in a modern world is still important and why?

Lek: Yes. Because the old world and modern world are still the same world.  People evolve but we should evolve to become better by the day.

BKF: What are the most common “faux pas” do you see people doing at the dining table, especially here in Thailand?

Lek: Eating bread with a fork and knife. Using mobile phones freely while enjoying the meal.

BKF: What are the most common mistakes do you feel the service staff or waiters do here in Thailand?

Lek: Not covering guest’s needs from the beginning. For instance if a guest asks for coca-cola, the waiter should determine if the guest wants to have his coca-cola with ice or lemon. And if lemon seeds must be removed.

BKF: Do you think having this Academy could improve the level of service here in Thailand’s industry?

BKF: Have you ever been approached by clients wanting to improve service to obtain a Michelin star?

Lek: Not yet but I’m sure it’s coming.

BKF: Do you have plans to expand or develop more in the future?

Lek: Yet, right now we have a training course in the classroom every two months, but we are building a complete 360-degree butler school expected to launch early 2021.

BKF: What kind of classes would we expect and types of lessons we would learn?

BKF: Could you name a few of the experts who teach the courses?

BKF: What is the price range of the courses and can anyone join?

BKF: What is the ultimate goal you would like to achieve with the NAI LERT BUTLER Academy?

Lek: To raise the standard of service in the hospitality and service industry in Thailand.