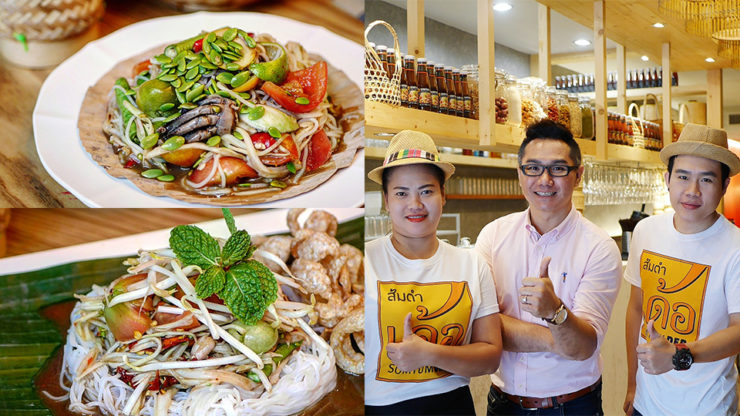 Brought to you by Chope

For those of you who enjoy their Som Tum (Thai Papaya Salad) but haven’t ventured beyond the more “classic” and safe varieties like the Som Tum Thai or Som Tum Buu (crab) or even the funkier, Som Tum Plaraa (fermented fish), then this beyond beginner’s guide is for you!

In this line-up, thanks to the guidance of Chef Korn of Somtum Der, we introduce variations of Som Tum hailing from specific regions of Isaan, Northeastern Thailand and even adaptations from Central Thailand, to those more obscure combinations. After a stint in any country, one should further explore the local food or at least be less intimidated when scouring over a menu of strangely titled and pictured papaya salads…and besides, it doesn’t hurt to look that extra badass when ordering among Thai friends.

The Somtum Der masterminds who have family roots deeply etched in the Northeast region of Thailand, have successfully pioneered and packaged Isaan cuisine to the international culinary world. They have done this by recreating an epitomized regional Thai dish by adding a touch of modernity in a vibrant and cozy setting, suitable for the discerning city dweller.

Without further ado, it’s time to test the threshold of exotic flavours and spice and to help get the taste buds rolling, Somtum Der is offering 1 *FREE* Som Tum Thai or Som Tum with Puu Plaara (crab with fermented fish) when booking on Chope and using the promotion code until September 30th, 2018.

Please note! The following menu is specific to Somtum Der’s unique recipe, as any – if not most – Som Tum creators will adapt originals to their own personal taste.

Central Thai style Som Tum, which doesn’t use plaraa and comes with a side of coconut rice. This particular recipe contains mung bean in the rice (a special touch from Korn’s mum) and if you want to expand on flavour, add some mackerel to the mix like Som Tum Der have done here.

Special Ingredients: Coriander, Scallion, Culantro “Pakcheefarang”, Somtum sauce, lemongrass and green beans.
Taste: Sweet, Sour, aromatic and herbaceous, you can also add mackerel for extra taste.
For foodies: who enjoy a well rounded Som Tum without too much spice, the side of rice gives a touch of aroma and sweetness to the experience while easing the spice. This is a good starter Som Tum before making strides towards the more experimental North.

Special Ingredients:  BBQ pork neck with dried chili powder and roasted rice.
Taste: Smoky, sweet, and sour. The toasted rice adds a unique crunchy and smokey element.
For Foodies: Who enjoy smokey BBQ meats in any shape or form! It tends to be more filling and therefore a tad pricier, but it’s a great meal-in-one if you’re alone, hungry and hankering for Som Tum. It’s important to note, for those who dislike heat, this dish can stand alone with very minimal spice.

A  melting pot of 2 styles, Central meets Northeastern. The perfect dish to crossover to the dark side of Som Tums.

Special Ingredients: Roasted dry chili, bean sprouts, and crispy pork and typically comes with dried shrimp and peanuts.
Taste: Sour, salty, sweet and spicy.  The roasted chili give depth and smokey heat as the crispy pork offers a powerful crunch, but it’s the final topping of bean sprouts which add that extra freshness.
For Foodies: If you can handle the heat and don’t care to get out of the kitchen, a generous amount of spice is a must for this dish and as advised by Chef Korn, should be eaten with a minimum of 10 chilies!

This Som Tum dish stands out because of its special ingredients popular in Issan, combined to create a truly unique and complex, countryside flavour and texture.

Special Ingredients: “Met gratin” (Thai bean pod seeds), field crab and “makeua pro” (Thai baby eggplant) and Thai tomatoes.
Taste: Salty, sour, and sweet with a slight bitterness and a dull crunch. The met gratin offers a slight bitterness, similar to that of “sator” (green stink bean) but much milder in taste and combined with the field crab the flavours become “muddier”. The baby eggplant and tomatoes absorb those robust flavours while still offering a bit of texture to that spicy bite. A dish that definitely should be eaten hot, hot, hot!
For Foodies: who like it hot and extra funky.

This is a tricky one. It’s not technically a “Tum”, meaning they don’t mix everything with the mortar and pestle, however, the ingredients and spices still go through the “pok pok” (pounded) in the mortar then the kanom jeen (vermicelli noodles) is mixed in, like a “Yum” (tossed salad). Therefore, it’s a cross between a Tum and a Yum, and at Somtum Der, you can only find it on the Specials Menu.

Special Ingredients: Mackerel from the Mae Khlong River, Green long been and Culantro “Pak Chee Farang”.
Taste: Salty, sour and sweet with a forest freshness from the Culantro and a deep muddy ‘river’ flavour from the mackerel. This is where the vermicelli noodles combines perfectly to soak up all those pungent juices, plus the noodles themselves are fermented.
For foodies: who like to think outside of the box. This “Som Tum” is particularly hard to find at any vendor, as informed by Chef Korn, you’ll need to seek it out that special cart with the most ‘black market’ Som Tum items. .