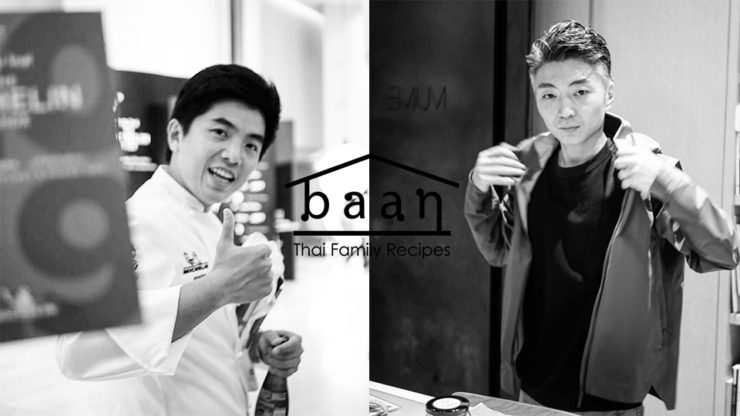 Chef Thitid “Ton” Tassanakajohn of Le Du and Baan in Bangkok and Chef Richie Lin of MUME in Taipei met harvesting yuzu, the fragrant Japanese citrus fruit, on a trip that also included Bangkok Chefs Dylan Jones from Bo.lan and Tim Butler of EAT ME. Their friendship blossomed and two years later has led to an exciting partnership that will launch in Taipei in December 2018.

The year the two met, the were also both inducted into the Asia’s 50 Best Restaurant list, and both have since won their first Michelin star. But their similarities don’t stop there. As Chef Richie comments, “Both Ton and I have similar mindsets and both Le Du and MUME also share some of the same philosophies. We both strongly believe in sustainability and try to apply it to our cooking as much as we can. This concept we will carry on in Baan Taipei.”

The chefs chose Baan, which means “house” and “home” in Thai, the brother restaurant of Le Du where Chef Ton serves Thai family recipes and where his little brother, Tam Tassanakajohn oversees the management and operations, for their first venture together. It is the first time that Chef Ton will be taking a restaurant abroad.

Bangkok Foodies talked to this fun-loving duo and brothers in culinary arms, to get the scoop on how the project came to fruition and what foodies in both Taipei and Thailand should expect.

BKF: Where did you both meet and how did you hit it off?

TON: Actually we first met in Japan during a yuzu safari trip together with [Chefs] Tim Butler, Dylan Jones and [publisher and Asia’s 50 Best Academy Chair] Mason Florence. It was a very fun trip.

RICHIE: We met 2 years ago in Japan when we were traveling with Tim Butler, Dylan and Ton in November 2016. We were traveling to Kochi in Japan, for the yuzu season. It was a long trip that lasted for 7 or 8 days. The whole trip was about exploring the area and harvesting yuzu. It turned out to be a great trip. And of course when a bunch of chefs travel together we all get very excited to share our ideas and our friendship started from that time.

BKF: When was the first time you ate at BAAN and what attracted you to the cuisine?

RICHIE: It was last year when I first ate at Baan. I was in Bangkok for the 2017 Asia’s 50 Best, and we were both included in the list for the first year. We were both super excited.

BKF: When and how did you come about the idea to partner to open a BAAN in Taipei?

TON: Richie ate at Baan many times. And one day we talked about this idea. He believes in me and I believe in him. Simple as that.

RICHIE: After that every time I’m in Bangkok I always eat at Baan. I really enjoy the food there. However, it was not until this year that we talked about it. I was in Bangkok for the Re-Food Forum earlier this year [a seminar on sustainable food practices held in March 2018] and of course I went to eat there again. I was cooking with Ton at LeDu the following day, I tasted a lot of the traditional Thai food in that trip and it is really different than the Thai food that is served in Taiwan. In Taiwan, I worked with mostly Taiwanese ingredients. I thought that if we could have someone who has good taste and knowledge about Thai cuisine and is willing to bring it to Taipei, people would enjoy it a lot. Then the idea came up and funny enough, Ton is actually thinking the same thing, that Baan is something that could expand and travel to a different country while still keeping the authenticity of Thai cuisine. So, bang! Here we go.

BKF: Are there many Thai restaurants in Taipei and how will Baan be different to those existing?

RICHIE: Of course there are a lot of Thai restaurant in Taipei. I have tried a lot of them, and I think the flavor is different. I think it’s because the chefs who are cooking Thai cuisine in Taipei do not have such a deep knowledge and understanding of Thai food. Taiwanese people tend to adjust the flavor and taste based on the Taiwanese palate, which I think is lacking a little bit in authenticity.

RICHIE: We will definitely use a lot of Taiwanese ingredients. We start with mostly same dishes as Baan in Bangkok, but surely Ton will create more dishes only for Taipei in the future.

BKF: Where in Taipei will you open Baan, could you describe the area a little?

RICHIE: We are opening in the same area as MUME. n fact it is only a 5 minutes’ walk away from MUME. I really like this area, Daan District. It’s a mix of both residential and commercial, but at the same time it’s cozy, it’s in the middle of the city and its very convenient. I also live not far away from the restaurant, so I’m very familiar with the demographics of this area.

BKF: Will the Baan brand be replicated in terms of design, layout and overall menu?

TON: The design will be different but still give you a feeling of home, with a Taiwanese touch.

RICHIE: We will keep the overall menu and brand completely the same as Baan in Bangkok. The decor and layout of course will be different. It will be a very modern design.

BKF: What were your most favourite dish from the BAAN menu?

RICHIE: I like everything! Hahaha, I enjoy the classics like the Som Tum, I can eat that everyday. I particularly enjoy the fried whole fish and massaman curry.

BKF: Why do you think Baan could work in Taipei?

TON: People love Thai food there! And we believe we could be one of the best representatives of Thai cuisine.

RICHIE: I think good Thai food will work anywhere in the world. It’s a cuisine that if executed well, everyone will love. Of course, in this case, I have a good partner in Ton, and I trusted his skills, knowledge and of course his taste in Thai cuisine.

BKF: What do you see as some of the biggest challenges of opening Baan in Taipei?

TON:   Ummmmm…. just like any new restaurant, to get it open. Not really easy hahaha!

RICHIE: I think it’s always difficult to stay true to what you believe, and of course keeping the authenticity of the cuisine. I hope the diners in Taipei will be open-minded to some of the new flavors and getting ready for some real heat!

BKF: Why did you choose, the more family style, Baan concept over Le Du’s finer concept?

TON:  First,  I think it’s easier to replicate with the same quality in Bangkok. Secondly, I want it to be easily accessible for anyone in Taipei.

RICHIE: I love Le Du. I have also eaten there multiple times and it’s a very memorable experience. I think Le Du and MUME share a lot of same philosophies. The level of cuisine and execution at Le Du, for me, would be very hard to replicate outside of Thailand. For the same reason,I think that MUME would not be MUME if it’s outside of Taiwan. We both think that Baan is a much easier to understand concept and it’s a lot more approachable for people who have less knowledge of Thai food.

BKF: When do you expect to open and how does one start booking?!

RICHIE: We are expecting to open the week of December 9th 2018 for a soft opening. Reservation should be starting at the same week. Chef Ton will also be in Taipei that week!