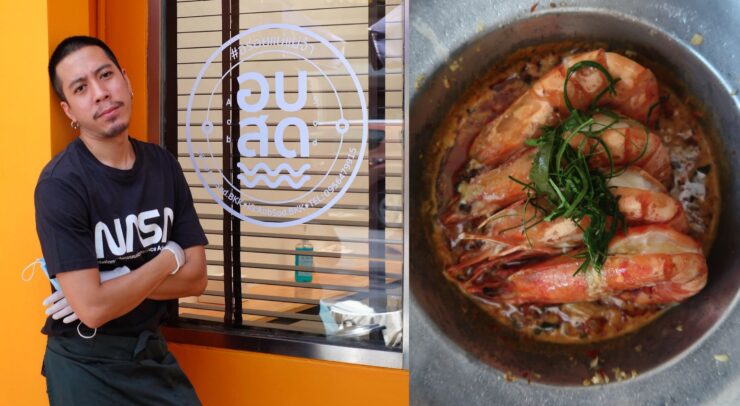 COVID-19 breaking- out affects everyone, many lost their jobs in the process. Many people found their new skill in cooking and began their online food enterprise. Bank Tingsuk is one of these people.

Bank started Aobsod Delivery, a noodles joint in Bangkok, which specialises in Goong Aob Woonsen [กุ้งอบวุ้นเส้น]. During the Bangkok lock-down, his noodles became quite a hit, which earned him enough money to open his first brick-and-mortar restaurant opposite Pom Prap Sattru Phai on Phra Athit Road in July 2020.

But before delivering noodles in Bangkok, and the owner of Aobsod Delivery selling Goong Aob Woonsen, Bank previously worked for an agency company but going even further back, Bank used to be a bartender. “I was a bartender at Il Fumo, I competed in several competitions. I loved that job — well, I still love it but I had to quit the job because at that time my family needed me to have a ‘normal job’ so I did what they had begged me to do but it’s not my thing, you know? I quitted my day job too and became a freelancer for a while before I started cooking Goong Aob Woonsen for a living.”

But what is Goong Aob Woonsen? Goong Woonsen is shrimps or prawns with cellophane string noodles baked in a metal or clay hot pot. Goong [กุ้ง] in Thai means shrimp or prawn. Aob [อบ] means to bake or cook inside a closed container in Thai. Woonsen [วุ้นเส้น] is a Thai word for cellophane noodles.

Actually, Goong Aob Woonsen isn’t a Thai dish but a Chinese dish is known as “Fensi Chen Xia”  [粉丝蒸虾] that the Chinese immigrants brought to Thailand with when they fled from The Chinese Communist Party. At first, the dish was popular amongst the Chinese immigrant community as time went on, some of the Chinese immigrants had worked and saved enough money to open their Chinese restaurants; the noodles gradually became popular amongst Thais as well. It’s become that popular, some Thai cuisine and Thai hot pot restaurants carried this particular dish on their menu, but in the current times, it has become more scarce, making it a ‘new’ sought after Thai-Chinese noodles in Bangkok.

The original ingredients of this dish also contain Sichuan pepper, white pepper, pork lard, garlic, chopped cilantro with its root, green onion and broth mixed with soy sauce and oyster sauce but many restaurants substitute Sichuan pepper with ginger because it’s cheaper, and use a lot of MSG.

“In my shop, I don’t use MSG.” Bank stated. “I don’t want to risk my customers with MSG allergic reactions, and I want my Goong Aob Woonsen to be authentic while many restaurants substitute the Sichuan pepper with ginger but I want to stick with the original recipe because you cannot replace the specific tingle feeling the way Sichuan pepper does on your tongue.”

When Bangkok Foodies asked why he decided that his noodles joint in Bangkok should specialise in Goong Aob Woonsen, he replied that it was because of his grandmother. “She often walked to her favourite place every day but that place is too crowded and makes the dish very slow. I didn’t want her to wait and have to walk — the place isn’t far — but she’s too old now.” So we asked him about the result, he said, “She stays at home and doesn’t go there anymore.”

At Aobsod Delivery, the Goong Aob Woonsen comes with 3 kinds of this pointy face crustaceans. For those who are low in a budget can enjoy the 150 THB Goong Aob Woonsen with common shrimps but if you seek something bigger, Indian White Prawn Aob Woonsen [กุ้งขาวอบวุ้นเส้น] (250THB) is a perfect choice.

Tiger Prawn Aob Woonsen [กุ้งลายเสืออบวุ้นเส้น] (300THB) is the most popular amongst Bank’s Goong Aob Woonsen dishes. And inside every hot pot, there lie 4 shrimps or prawns and they all come in the same size. “I always check the ingredients I get from my producers. Sometimes I order 10 kg of prawns and shrimps and I check the size of my prawns and shrimps and I often have to send the 20% of the products back to them because of the poor quality.” Bank told us, “I have to check every single ingredient because I want my customers to be fulfilled. You know, if I’m a customer I need to get what’s worth paying. If it’s not worth the pay then who would come back?”

The crustaceans aren’t the only thing that got quality control, the cellophane noodles are picked with care as well, “You can call me a picky eater.” Bank chuckled, “We have changed so many brands until we found a producer who can make the right needles for us. The quality cellophane noodles are supposed to be resilient, soft but shouldn’t swell from absorbing to much sauce after the temperature gets lower.”

Goong Aob Woonsen isn’t the only menu available here at Aobsod Delivery. Bank created his own signature dish called Goong Aob Tom Yum Heang [กุ้งอบต้มยำแห้ง] (300THB), a dish of 4 prawns cooked inside a hot pot with thick Tom Yum sauce made of fine-chopped spices and herbs, chilli paste and fresh lime juice that he personally squeezes every day served with steamy jasmin rice. This dish became one of the best sellers of this noodles place in Bangkok.

We asked Bank about his opinion on cooking and mixology and the answer is, “You know, chefs and bartenders are kind of the same. We learn about flavours, play with them and combine them to make tastes.” He continued, “The only difference is the end result — you know, one comes in liquid and the other one comes in solid.”

If you’re hungry for some legit authentic recipe of Goong Aob Woonsen order delivery with this noodles joint in Bangkok directly or visit their bright orange-coloured shop with a parked old bicycle just a few blocks away from the famous Karim Roti Mataba. Aobsod Delivery might be a trip from your neighbourhood, but we are pretty sure it will be worth the expedition.

We also heard that this noodles joint in Bangkok is expanding the menu so keep yourselves posted on Aobsod Delivery’s Facebook page where you can order a delivery or contact LINE: @aobsod.bkk or Tel: +669 5647 9915