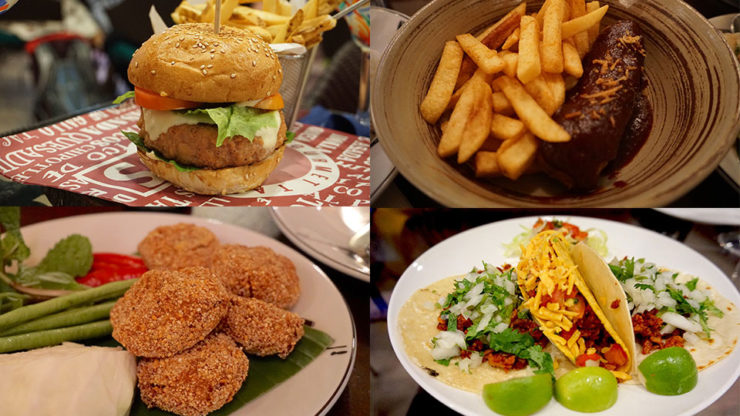 Here come the irritated groans of the anti-vegan brigade claiming vegans should just “eat their rabbit food and shut up”. How dare they use meat phraseology for non-meat foodstuffs? The gaul of it all. The word “sausage” should only ever be used for lengths of intestine stuffed with a gritty mash of pig snout.

I am not a hippie, a vegan, a vegetarian, or a pescatarian. Nor am I someone who doesn’t eat meat except for the occasional drunken binge on chicken McNuggets. I am a dedicated eater of the flesh. I am also aware enough to know that eating meat is bad for the environment. Industrial factory farming is infamously abhorrent and six-week-old chickens are not supposed to have ample bosoms.

These alternative-protein, meat-like products are, in fact, not really for vegans and vegetarians. In the USA, for example, only 3.4% of people are vegetarian and 0.4% are vegan. Sorry, carnivores, but this industry has its sights set on you. They know that tofurkey sucks, they hate tempeh burgers, too. Veggie food producers have been, by and large, quite terrible at making substitutes good enough to satisfy the majority. 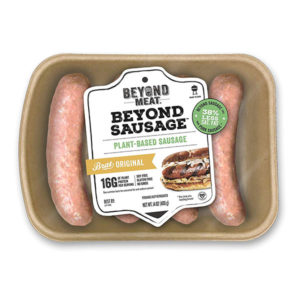 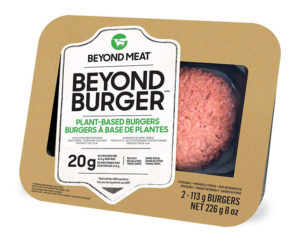 The aim of Impossible Burger, Beyond Meat, and OmniMeat is to challenge meat-eaters to accept more plant-based foods into their everyday diets. Small changes on a large scale make for a bigger impact. 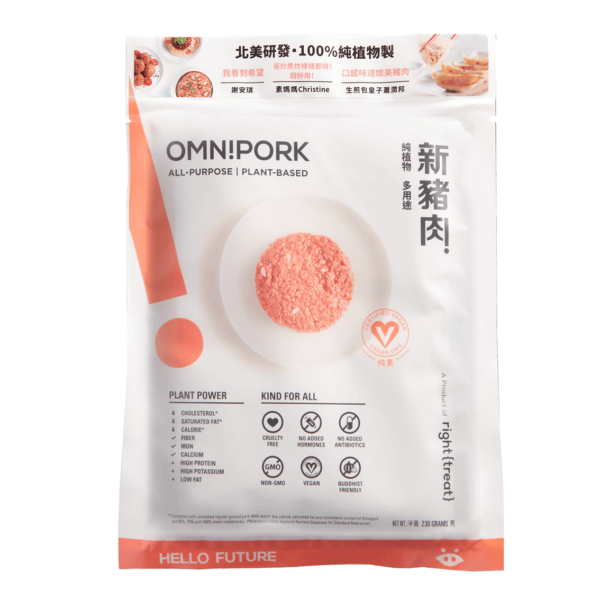 We (me and my partner in crime), made it our mission for this piece, to seek out these ‘fake’ meats available at both popular local restaurants and supermarkets. We took one for the team, or maybe you can say, we were fakin it to make it.

It was with scorn and scepticism, that my partner was dragged to Terminal 21’s 4th floor to Sunrise Tacos for our first taste of alt-protein products. Being forced to eschew his usual diet of meat, cheese, and carbs for a meal of vegan food was considerably annoying for him.

Sunrise owner, Floridian, Greg Lange believes that he has taken a calculated but worthwhile risk in being the first Mexican/Tex-Mex restaurant to include OmniMeat on the menu.

“For a restaurant owner, it is a sacrifice for your venue because you know you are going to be slammed online by some and you have no control over it… at the end of the day, I do feel that I want to be environmentally conscious… I want to make people happy and give them an alternative,” he says.

Despite risking a social media maelstrom, feedback has been mostly positive from meat-eaters and vegetarians alike. Dubbed “Wonder Meat,” the street tacos are definitely a favorite. OmniPork in a quesadilla, sprinkled over nachos, or dripping with lime and cilantro in a corn tortilla is almost impossible to distinguish from actual meat. My previously disgruntled partner’s mind was forever changed, if the future must be meatless, maybe it won’t be so bad.

Chef Luis Villa from Mexico opines on the simplicity of the process, “Perfect colour, to be honest, better than real pork!” He claims that the product browns the same way as pork, and because of its very neutral flavor, it takes on seasoning more easily and, in turn, requires less salt. 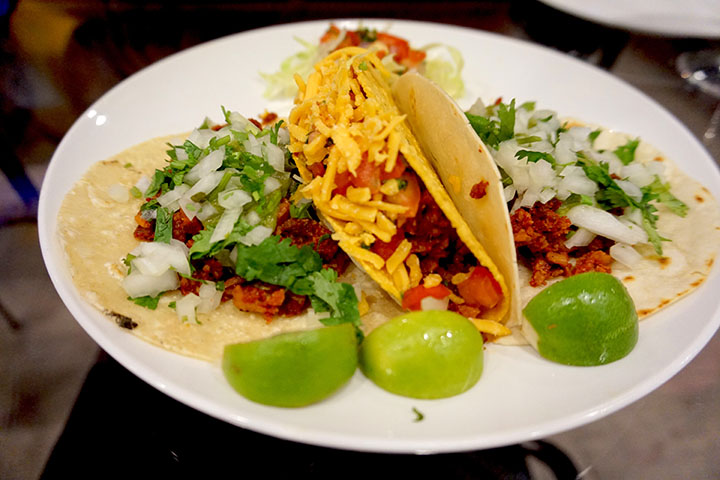 There is, however, something in the springy texture which almost gives its secret away. Lange believes this is the animal fat factor. Lard plays a big part in a burger’s taste, and they just don’t have that combination of crispiness, juiciness, and umami needed to make the product magical. It is for this reason that the super thick burger was not a personal favorite. We would be curious to see someone attempt a smash burger with an alt-protein product though — side-eye firmly on you, Easy Burger. 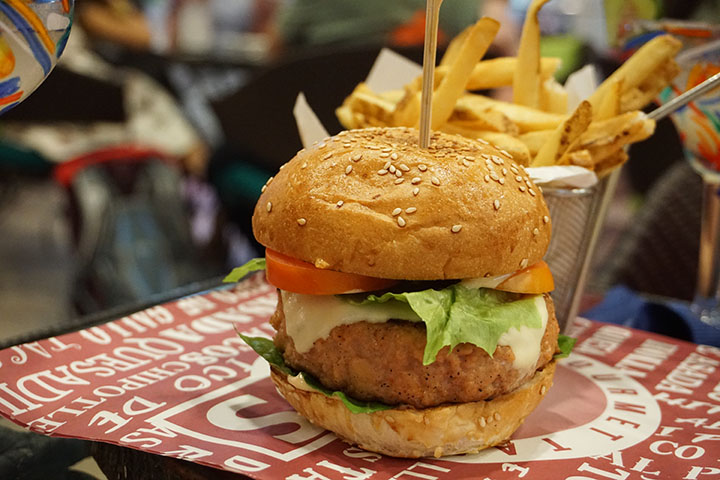 Lange’s OmniPork products are priced the same as the meaty menu items. You can get OmniPork at all ten branches of Sunrise Tacos around Bangkok and the products are available online from selected stores for delivery with Foodpanda, LINEMAN, and Grab.

At the Grand Hyatt Erawan Bangkok, the tasting turns to finer dining at You&Mee Thai restaurant. The dishes here come courtesy of chef de cuisine, Savimol Peansompol. We were bombarded with a feast of stunning Thai OmniPork dishes: Yum woon sen, Larb, Larb tord, Kuay tiew tom yum, and Phad krapao rad khao. Respectful to the traditional Thai flavors, the kaprao was enhanced by fragrant mushrooms and thick sauce, the tom yum was flavorful without being too spicy. 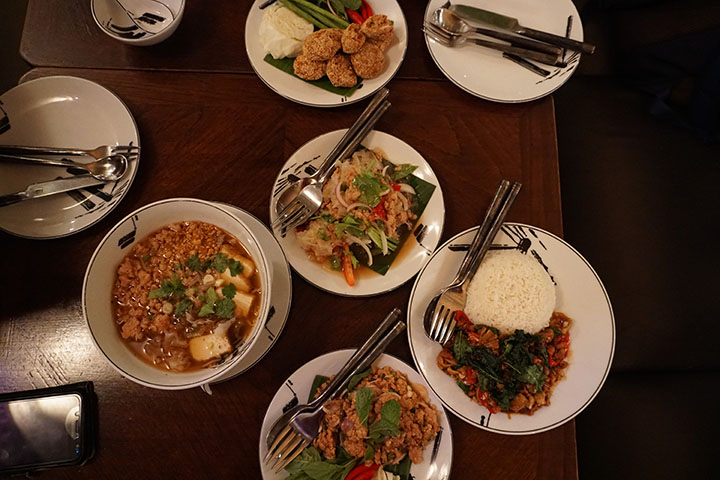 The not-quite-right texture of the OmniMeat, however, is most evident in the larb, probably the least favorite of the offerings. It wasn’t bad, but lacking a certain je ne sais quoi. The larb tord, on the other hand, was spectacular; the crispiness of the crumb balanced the sponginess of the OmniMeat. 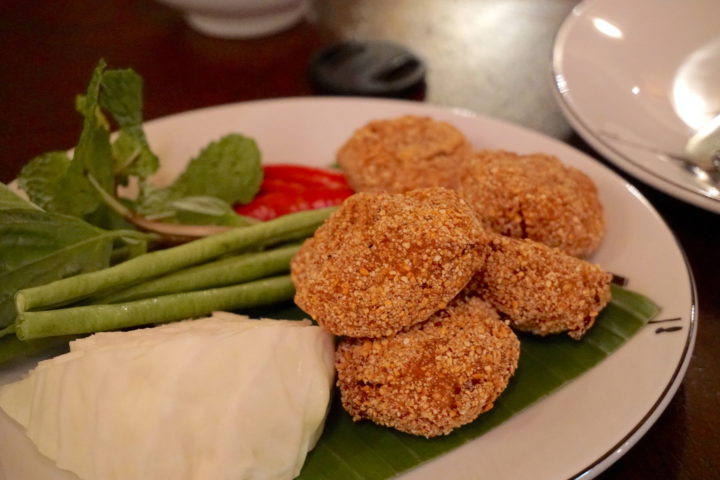 We also tried the Beyond Curry Sausage the burgers of the The Dining Room, which came in a rich barbecue sauce, and the Beyond Burger with its unusual but delicious topping combination of som tum, vegan cheese, and garlic chili sauce. Both of these items far-surpassed expectations. 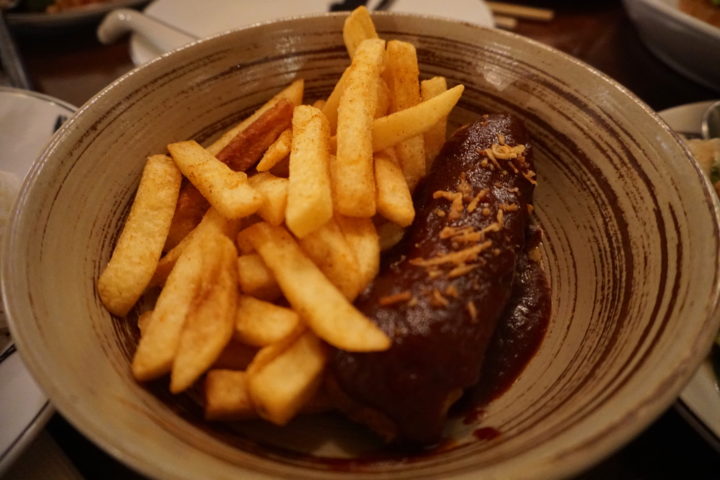 The Beyond Burger “beef” patty was far more realistic than its OmniPork brother. The sausage could have been sitting next to a real, German beef sausage and sausage buffs may be none the wiser. 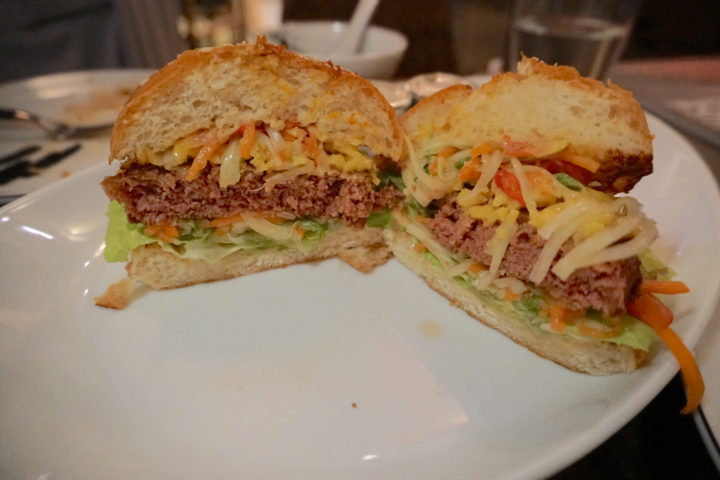 Confident in producing a culinary masterpiece which would outshine both Sunrise Tacos and Grand Hyatt, this chef was unable to find Beyond Meat burger patties in the freezer section at Villa Market — instead, having to rely on the brand’s “Beefy Crumbles”. Undeterred and confident I forked over 290 baht per 283 grams, around US$34 per kilo for plant crumbs. 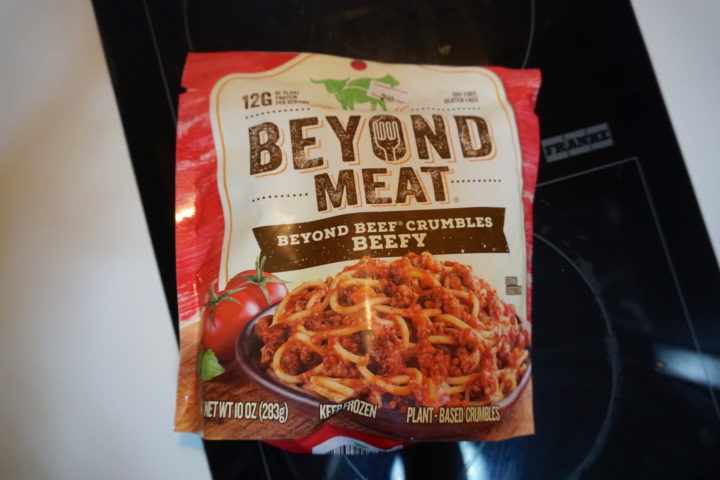 Following the instructions on the packet to the letter — a hot pan with some oil — the entire packet was cooked as instructed. It was vile. Basic seasoning and tomato sauce were added to ameliorate the flavor, but nothing would save it. The texture was unbearable: tiny, hard little pencil erasers with no meat taste. The Amazon reviews for Beyond Meat Crumbles were no less forgiving, all of them 1-star. 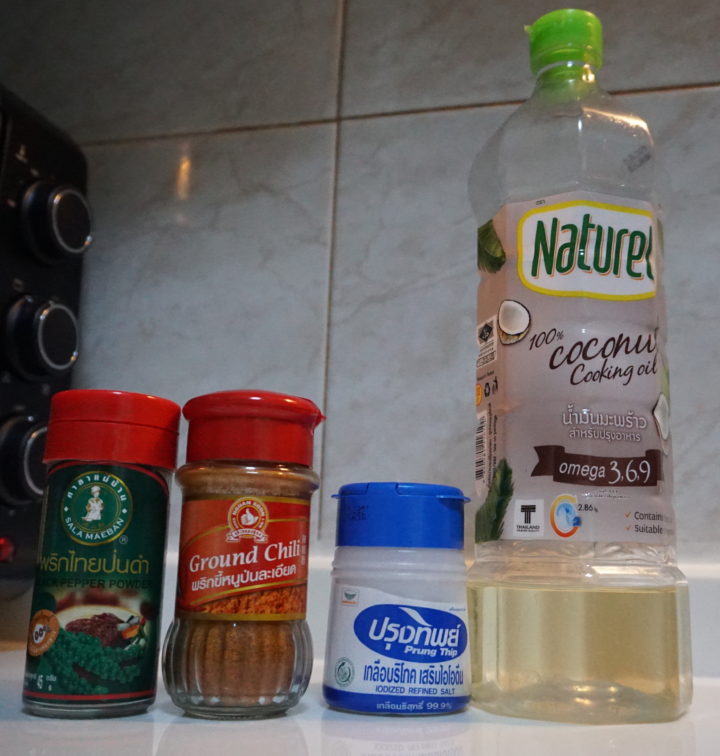 OmniMeat in Mexican food is a wonderful thing, a great alternative for vegetarians sick of eating salad and for health conscious carnivores. Sunrise Tacos is an ideal gateway onto the faux meat bandwagon; it is still accessible, calorific fast-food, but a bit better for our planet and for your body. The Grand Hyatt, Erawan was the tastebud-tingling winner, with OmniPork skills and Beyond Meat treats that will fool most meat eaters.

Beyond Beefy Crumbles? Do not try this at home kids!.

For those who want to delve deeper into the meatless unknown, here are some vegan meat product facts: 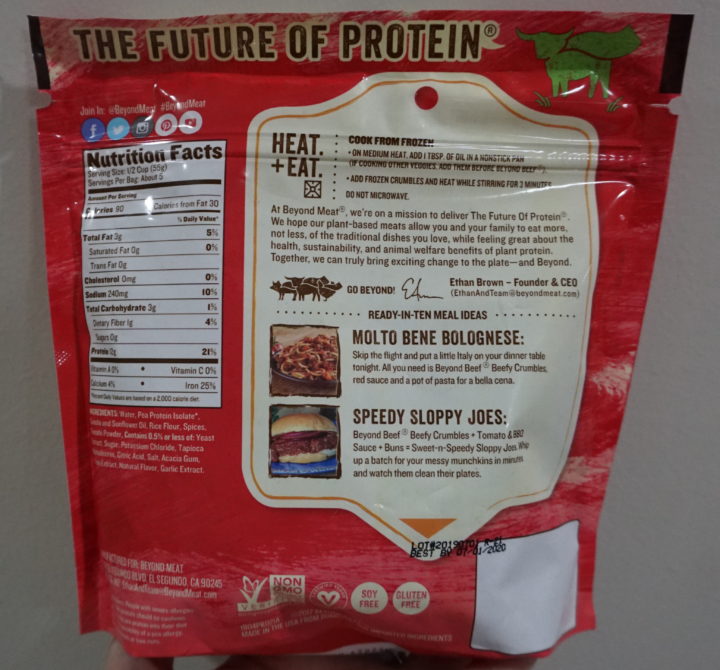